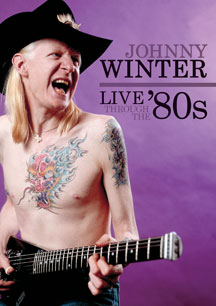 It’s all well and good to demand the highest standards in video quality in a concert film. Technology has progressed to the point where viewers pop in a music DVD expecting to see high quality digital transfers, 5.1 digital sound, and expert camera work. But sometimes, if the content itself — you know, the actual music — is important enough, one has to at least consider letting those standards slip in the name of good entertainment.

That’s the approach you’ll need to bring to a viewing of the compilation DVD Johnny Winter Live Through the 80s. An important artist whose onstage career has not been extensively documented on film, Johnny Winter is represented on this disc through clips from six different concerts spanning the period 1983-88, plus some (very odd) odds and ends.

Yes, the video quality is dodgy in places. A good bit of it looks as if it was sourced from a collector’s shelf, and that may well be the case: back in the days before DVD-Rs and the like we collectors used to trade VHS dubs of rare and/or unreleased music-related material. And when we’d receive a package in the mail containing some videotapes of, say, John Lennon‘s homemade recordings of him on solo guitar and voice (to name but one gem), we’d have no clue how many generations away from the original our copy was. In general the answer was: more than you’d like.

And so it is with some of these clips. The audio quality is also not anything to get excited about: it’s mostly in stereo, never in 5.1 (though the packaging says the DVD is, the source material simply ain’t), and sometimes muffled. But you know what? Hardly any of that technical stuff matters. This is Johnny Winter we’re talking about here.

The DVD opens with three numbers from Winter’s Toronto gig as shown on MTV. And you probably would have guessed that when viewing it: there’s a very MTV-ish look and feel to the proceedings. Remember, if you will, that in the early 80s the music channel showed concerts every weekend; hard to imagine now, yes? The lineup for this gig is Winter on guitar and vocals plus Jon Paris on bass and blues harp (Paris is Winter’s sideman throughout this entire compilation) and Bobby Torello on drums. The band is in fine form, and in a contrast to much of Winter’s 70s work (explored in an earlier release called Live Through the 70s, reviewed here), Winter doesn’t have a second guitarist or other musicians: if you hear a guitar note, it’s him. Pure and simple.

A 1984 Roskilde Festival gig is the visual high point of the disc. The audio and video quality are (relatively speaking) top-notch for this multi-camera, pro-shot performance. Here Winter rolls out his unique blues-rock hybrid (few artists have managed as successfully as he to bridge the two styles convincingly without watering down one or the other). Three of the four numbers will be quite familiar to fans of Winter’s 70s work: “Jumpin’ Jack Flash,” “Highway 61 Revisited” (a Dylan tune that Winter has all but made his own) and Chuck Berry‘s “Johnny B. Goode.” The song “Boot Hill” was, at the time of this show, one of the highlights from his album Guitar Slinger. For this show and all subsequent clips on Live Through the 80s, the drum seat is held by Tom Compton.

Guitar purists may or may not rejoice at the sight of Winter’s now-trademark Erlewine Lazer guitar; the headless, minimalist axe doesn’t have the visual presence of Winter’s (briefly-seen) Gibson Firebird, but the light instrument does seem to all but float in Winter’s arms, and he coaxes some pretty impressive fire from it throughout.

The Roskilde performance ends abruptly. Winter, taking a solo out toward the front of the stage’s ego ramp, is pelted by a projectile thrown by a concertgoer (it looks like a bottle, but it’s hard to tell). Startled and more than a little annoyed, Winter stops the show and exits the stage. He’s known for being pretty unflappable, but here Winter is clearly justified in his annoyance. Still, it’s an odd spectacle to witness.

A pair of songs from Passaic’s Capitol theatre from later that year are represented in fair video quality, but any complaints about those visuals will pale once the next section is viewed. Two excellent performances “Lights Out” and “Please Come Home for Christmas” are captured by what all visual evidence suggests was a bootlegger. The performance is taken in via a single camera — with lots of panning — and the audio sounds as if it is taken directly from the PA feed. Grainy, dark, blurry, this is still worthwhile thanks to the performances. It’s also an odd juxtaposition to see Winter and band less than six months after the Roskilde gig (100,000 in attendance), here in a small club.

A pair of Alligator Records artifacts are included next. Now, one thing you probably don’t think of when the name Johnny Winter is mentioned is music videos. Well, friends, there’ a reason for that. The song “Don’t Take Advantage of Me” is rendered MTV style here with a video that is awful beyond description. We see Winter twirling around in a Texas roadhouse-style place. Some cringingly 80s-looking ladies (teased hair, off-the-shoulder blouses and shiny facial makeup) all have their eyes on Winter, and their dates — central casting good-ol-boy types all — are none too amused. A fight ensues, but it’s rendered in faux “gay 90s” sepia tones. Winter slays ’em all with his axe, and then proceeds to magically tattoo each of the ladies with a little ol’ Texas tat. One of the women — the only attractive one, as it turns out — is former Saturday Night Live cast member Nora Dunn. One suspects she does not include this video on her resume. An Alligator EPK (electronic press kit) promoting the same song is far better, and shows the notoriously reticent Winter willing to actually talk on camera a bit. He does so candidly, and the brief clip is worth seeing.

Three tracks from a Swedish soundstage gig are next. These are presented in very good quality (again, the grading is in relative terms). “Sound the Bell” and “Mojo Boogie” are excellent workouts. A rarely-mentioned quality of Winter’s musicianship is his ability to play sympathetically: yes, he’s the lead axeman, but when John Paris takes a harp solo, Winter drops back, adding just the right touches to highlight the bassist’s playing. While it’s always a treat to see Winter’s fire-breathing guitar wizardry on display, witnessing him share the spotlight only adds to the enjoyment.

A rainy nighttime gig in Pistoia, Italy wraps up the set. Once again, the performance is stellar, and the video quality is lousy. The audio’s none too great either, but if you’ve made it this far, you probably won’t mind.

A good companion to the Live Through the 70s set from a few years back, Johnny Winter Live Through the 80s is — until the unlikely event of something better quality coming along — the best way to get a visual survey of Johnny Winter’s work during that decade. With the exception of the music video, it’s relatively free of 80s-styled trappings, instead presenting Winter’s timeless, high-octane blues-rock hybrid in an onstage power trio format. And since Paul Nelson — Winter’s manager, second (highly accomplished) guitarist and guy-who-looks-out-for-Winter’s-interests — is credited as an Executive Producer, for a change we can assume that Winter will enjoy some profits from airing of his work. For that alone this would be a worthy purchase.