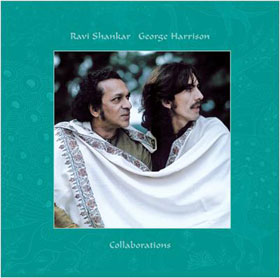 This one’s a rare and unexpected treat. While any number of Beatles-related films remain officially unavailable — there’s still no legitimate DVD release of Let it Be, nor the ’66 Budokan shows, nor the Shea Stadium film — yet the folks at Dark Horse (George Harrison‘s custom label) have put together a box set of Ravi Shankar material that includes a semi-restored 1974 concert film of Indian music.

The aptly-named Collaborations is an expansive (but not too expensive, retailing for $55.99) package that includes no less than three CDs and a DVD plus a detailed booklet and fancy box. The contents of the discs are an assortment of familiar and rare material.

The first CD is a reissue of the 1997 Chants of India album. While from a marketing standpoint that album (on its original release) was positioned as a bandwagon-jumping response to the runaway success of the Chant album by the Benedictine Monks of Santo Domino de Silos, in reality there’s almost no connection between the two. Chants of India is traditional vocal-based Indian music. The Shankar album was produced by Harrison, though listeners looking for some sort of genre-bridging fusion akin to the “Lady Madonna” b-side “The Inner Light” will come away disappointed and confused. This is the real stuff.

As a rock-oriented western listener, my own tastes aren’t too satisfied by the Indian vocal chant stuff. It’s clearly foreign-sounding, with little if any grounding in any musical tradition that western ears would find familiar. That said, it’s impeccably rendered, and fascinating for what it is. It just doesn’t rank high on my must-play-often list.

The 1976 LP The Ravi Shankar Music Festival From India is another story entirely. While it, too, is vocal-based, there’s a much more lively vibe to be found. The music is joyous, expressive and deeply textured. While there are differences in musical notation between Indian music and western, forms, it might be said that a lot of the music on Music Festival From India is in a major key. Sort of.

Listeners with little or no previous exposure to Indian music may find this disc quite endearing; the call-and-response vocal arrangements and intriguing percussion come together to create a delightful ambience. And go ahead and forgive yourself if you find the music a bit reminiscent of some of the mood pieces from the Beatles’ Help! film and soundtrack LP. While those were wrangled into something approaching pop song form, these are (again) the real deal. Yet they have a more familiar feel than the much-later Chants of India set. With the original vinyl a fairly rare commodity, this reissue is a welcome addition. The highlight may well be “Chaturang,” a number that opens with what westerners might call a drum solo. That gives way to a fetching melody that suggests connections between Indian music and Tibetan, Chinese and Japanese musical forms. (Or at least it does to these provincial, rock-attuned ears.) A variety of moods are explored on this album, and it’s surprisingly accessible.

The third disc in the set is perhaps the missing link. Shankar Family & Friends was originally a 1974 LP on Harrison’s Dark Horse label. Shankar toured the USA in support of this album until suffering a heart attack. Unlike the other discs in this set (and the DVD, which we’ll discuss presently), this music attempts — and succeeds — at bridging the gap between Indian traditional forms and western pop music. From the opening, listeners will know they’re in for something different. Piano, electric bass guitar, and a traditional trap kit are all elements of the lovely, haunting and unforgettable “I Am Missing You.” Shankar’s sister-in-law Lakshmi Shankar is the lead vocalist on this and several other tracks.

Musically, several of these songs have more in common with the sort of material one would find on Harrison’s albums of the time. But the album overall is a delightful amalgam of styles: one song might be sung in English, but then another in Hindi. One track might feature Moog synthesizer, while another would be completely built around traditional Indian instrumentation. More than half of the album is given over to tracks designed for a ballet that never happened. Part of that unstaged ballet, the track “Lust (Raga Chandrakauns)” bests any of Harrison’s own attempts on, say, Wonderwall Music to fuse west and east. The track sounds like an Indian take on Isaac Hayes‘ Shaft soundtrack; amazing. And “Dispute and Violence” is delightfully odd beyond description, with a horn section that has to be heard to be believed. 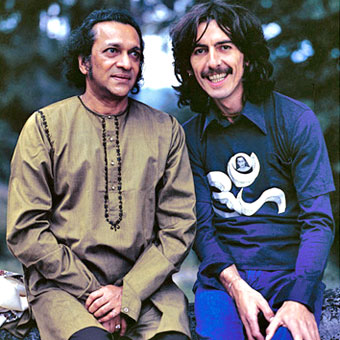 The artist lineup on Shankar Family & Friends will be familiar to any liner notes reader owning Living in the Material World: Klaus Voorman, Nicky Hopkins, Billy Preston, Tom Scott, and a curiously-named guitarist who goes by the name of Hari Georgeson. The sort of album that could have only come out in the 70s, and only under the direction of George Harrison, Shankar Family & Friends is the musical highlight of the CD portion of the Collaborations package.

Then there’s the DVD. Never let it be said that Harrison’s estate doesn’t pack value for investment into their products. A long-lost concert from 1974, filmed at London’s venerable Albert Hall, is the centerpiece of the DVD. The opening scroll explains that much of the film has been lost or damaged, and it’s true that the visuals are not what 21st century high-resolution viewers have come to expect. Kudos to Dark Horse, then, for electing to restore what could be salvaged. The surviving footage is nothing short of amazing. Outside of the opening section of the Concert for Bangla Desh, most western viewers will have never seen Indian music being performed live onstage. Even though the visuals are at times blurred or otherwise dodgy, the joy, intensity and mastery of the players comes through crystal-clear. Shankar himself is seen alternately conducting the ensemble and playing sitar. In fact on some numbers, he’s but one of three sitar players.

The audio of the Albert Hall survives in pristine quality, and is synched to the video. Where visuals were unavailable, stills are displayed while the high-quality audio plays. As an example of Shankar and his ensemble at the peak of their creativity and popularity, the Albert Hall concert is an invaluable document. And seeing good old George introduce the show is a treat beyond compare. His embrace of Shankar just prior to his exiting the stage speaks volumes about his love and respect for the master.

Anyone open to Indian music should check out this set. Anyone who’s a serious fan of Harrison and/or Shankar simply must own it.