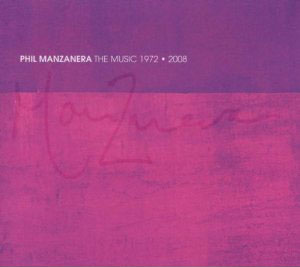 Guitarist Phil Manzanera is one of those characters to which one can rightly apply the phrase “musician’s musician.” Never one to crave — much less hog — the spotlight, Manzanera has nonetheless built an impressive body of work since his professional debut in 1972. Through his work with Roxy Music and 801, his solo projects, and his collaborations with estimable talents such as Brian Eno and David Gilmour (to name only the most high profile of many), Manzanera has never failed to produce compelling music.

For reasons not entirely clear to this writer, the Manzanera career retrospective compilation The Music 1972-2008 has just now landed on my desk. (It’s apparently been out since 2008, though perhaps not in North America.) Lucky me, because the set — two CDs plus a DVD — is a thoughtful and well-chosen overview. It’s not without its idiosyncrasies, though.

The music on the two CDs is laid out in chronological order, beginning with Manzanera’s first composition on record, Roxy Music’s “Amazona” from their third LP, 1973’s Stranded. From there we find “Needles in the Camel’s Eye” from Eno’s solo debut Here Come the Warm Jets, an album that’s essentially a collaborative effort between Eno and the guitarist.

While the first two tracks are excellent and essential, it’s only when “Out of the Blue” (from Roxy Music’s Country Life) comes on that the listener begins to develop some small sense of Manzanera’s talents and approach as a player. While he favors a style that’s vaguely reminiscent of Pink Floyd‘s David Gilmour, Manzanera leans in a more angular and dissonant approach. Like Gilmour, Manzanera places great emphasis on tone and texture, but he goes places sonically that are unexpected.

As the first disc unfolds, it guides the listener through the year 1982. Oddly, the fourteen tracks (half from Roxy Music, one from Eno, two from 801 and the remainder from Manzanera’s solo work) completely skip over both his Listen Now album (credited to Phil Manzanera’s 801) and the peerless K-Scope. Apparently the goal of this set is less to provide a representative selection of Manzanera’s work, and more to include items that make sense within the context of a particular narrative.

That narrative, as it turns out, is to put forth examples of the guitarist’s growth as a player, and his ever-widening musical interests. As the documentary included on the DVD (“Revolution to Roxy”) explicates, Manzanera’s musical journey started in interesting places, moved around, and continued in ever-yet-more fascination directions. The guitarist’s Latin roots are a central theme of the entire set.

While listeners familiar mostly with Manzanera’s Roxy and solo work might find the inclusion of so much Spanish-language music on the set a surprising development, it’s a central theme in Manzanera’s work. The period 1983-2000 is completely skipped over on this set, perhaps leading the listener to search the impressively-designed packaging for some missing disc.

But it’s not there. So Manzanera’s collaborative works with John Wetton and others are not included. As the documentary makes clear, Manzanera remained busy during that period, but the emphasis leaned toward Latin-themed work. As far back as 1975’s Diamond Head, Manzanera was already including Spanish lyrics in his songs, and that direction — along with a fascinating development in guitar style that fused Spanish styles with his thickly chorded semi-progressive leanings — would be the central theme of much of his subsequent work.

That second disc is home to some fascinating music, and not all of it is Spanish-language themed. The highlight is a track from Manzanera’s 2005 album 50 Minutes Later called “Enotonik Bible Black.” As the title telegraphs, the cut is a vaguely King Crimson-ish excursion featuring treatments by Brian Eno. It’s compelling throughout.

The net effect of listening to the music on the second CD may well be to lead listeners back for a closer inspection of Manzanera’s work over the last decade, and for that alone The Music 1972-2008 is a worthy package. Despite its many omissions — Quiet Sun, the Explorers, etc. — The Music 1972-2008 is a consistently engaging, intriguing and rewarding listening experience.