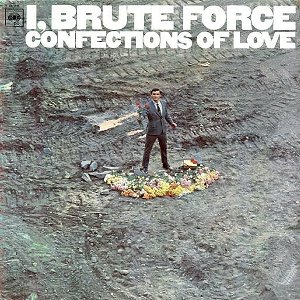 Do you ever sit around pondering unlikely musical scenarios? Strange, uncharted-waters of stylistic combinations? Well, if that sort of thing interests you, you’ll know about — or want to know about — Confections of Love.

Originally released in (believe it or not) 1967, the album credited to I, Brute Force was (and remains) actually Stephen Friedland, an American singer/songwriter. But a listen to Confections of Love answers the all-too-infrequently asked musical question, “What would it sound like if a late sixties easy listening artist dropped acid?”

Yes, Confections of Love is strange. Deeply, deeply strange, in fact. Difficult to describe, the music on the record is sort of a cross between Frank Zappa and Mason Williams. File it under: Incredibly Strange. Yet it’s oddly appealing, in a truly off-kilter way. Kitschy MOR arrangements of the spare-no-expense variety start things off in a fairly normal way, but then the nasally vocals of Brute come in. And if that’s not an odd enough juxtaposition, the lyrics of a track like “In Jim’s Garage” push things right over the edge. Sound effects and vocal intercessions call to mind the showier moments of Jim Steinman‘s work with Meat Loaf, but this was way back in 1967, long before that style would gain any commercial traction.

The record’s arrangements are faultless. This is most definitely not rock’n’roll: tympanis, big trap kits, horn sections, strings…they’re all here, nearly overstuffed in a way that would make one expect to hear the songs on a variety show of the era, something like the Smothers Brothers show.

But the lyrics are far too strange, the subjects too idiosyncratic for that kind of commercial exposure. “The Sad Sad World of Mothers and Fathers” is a very stagy number that wouldn’t seem out of place in an off-off-Broadway show…on acid. Even though Brute’s voice isn’t what most would consider conventionally appealing, there’s something irresistible about these songs.

“Tierra Del Fuego” sounds like Herb Alpert and the Tijuana Brass with a hopelessly nerdy vocalist…on acid. On “No Olympian Height” Brute aims for a Donovan vocal style. He doesn’t pull it off, but the schmaltzy arrangement is, again, oddly appealing. “Cudd’ly” goes for a musical arrangement familiar to fans of, say, the New Vaudeville Band and certain lesser tracks from Spanky and our Gang or Sopwith “Camel.”

Nobody seems too sure exactly what the inimitably weird “Sitting on a Sandwich” is actually about, but that ambiguity doesn’t detract from enjoyment of this tune. “Brute’s Circus Metaphor” is among the most musically intriguing numbers on Confections of Love, and lyrically it’s as described: an intentionally heavy-handed metaphoric meditation on love. Delivered with just the right amount of tongue in cheek, it’s surprisingly catchy.

“Brute’s Party” ups the strangeness ante, if such a thing seems possible. “As Long as My Song Lives” moves closest to the aforementioned Mason Williams territory, but the lyrics betray a malevolent streak behind the silly mask. Leave it to Brute to write a song called “Tapeworm of Love,” another metaphoric rumination on the vagaries of love. The big, bouncy arrangement almost obscures the unnervingly strange (and dark) lyrical content.

The original Confections of Love disc wrapped up with “Making Faces at Each Other,” a song which is — you guessed it — strange. Here Brute pulls out all the stops arrangement-wise. The 2010 reissue on Bar/None includes three more tracks dating from the late ’66 Confections of Love sessions, and the best of these is “Conjugation,” a track that bizarrely presages the whole Schoolhouse Rock phenomenon. On acid, that is.

But the real bonus highlight is the inclusion of both sides of the infamous Apple Records 1968 single, “Nobody Knows” b/w “King of Fuh.” The latter managed to keep the song from getting stocked in stores, and now ranks among the rarest of Beatles-related items. George Harrison championed its release, and reportedly John Lennon was a fan of Brute Force.

If you’re in just the right frame of mine (and/or on acid) you too might dig Confections of Love.