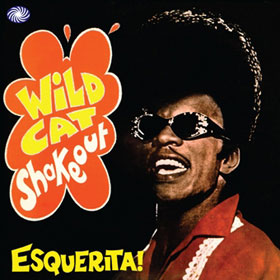 The accepted and/or conventional wisdom holds that Little Richard (Penniman) was mightily influenced by a character known as Esquerita. As quoted in the liner note to Fantastic Voyage’s expanded reissue of the UK Speciality LP Wildcat Shakeout, Little Richard says, “I was taught how to play piano by Esquerita…He was one of the greatest pianists and that’s including Jerry Lee Lewis, Stevie Wonder, or anybody I heard. I learned a whole lot about phrasing from him. He really taught me a lot.”

The fact remains that when their paths crossed, Esquerita (born Steven Quincy Reeder, Jr.) wasn’t exactly in show business: he was more of an accompanist to a religious huckster of sorts called Sister Rosa. But his approach involved a combination of skilled gospel technique and whoops and hollers. In fact his style and delivery are not radically different from Little Richard’s. And it was only after Penniman’s commercial rise that Esquerita decided to get in the game himself.

But let us now set aside all that and concentrate on the music. Wildcat Shakeout is arguably one of rock’s great missing links. While Esquerita — as documented on these twenty sides — does inevitably conjure comparisons to Little Richard, he’s his own man musically. The lion’s share of these raw-and-rockin’ tracks were in fact written by Esquerita.

“Rockin’ the Joint” is among Esquerita’s most well-known numbers. It’s a hard-charging piano-based rocker that doesn’t break any sort of ground musically, but remains lots of fun. Esquerita plays with a sure hand yet careens right on the edge of abandon. And that song sets the tone for the whole disc. His cover of “Hole in My Heart” would sound right at home on a compilation of tracks by Elvis, Jerry Lee Lewis, Fats Domino, Bill Haley and His Comets, and their peers. The only difference is a slightly rawer edge to the performance, one that places it closer sonically to some of the jump blues sides cut in the 40s and 50s by artists like Louis Jordan.

“Hey Miss Lucy” is a thinly veiled rewrite of Little Richard’s “Miss Ann,” but so what? It’s a fun track, showcasing Esquerita’s whoops and hollers, and screams. A honking sax solo might technically be the lead solo instrument, but listen on and you’ll hear Esquerita banging the hell out the piano.

“Get Back Baby” shows a jazz side to Esquerita’s playing, and the arrangement leads in a gospel vocal direction. But it rocks and swings, baby. The backing vocals feature the Jordanaires in a looser manner than you’d find in their work with Elvis.

The other songs offer up more of the same, but that’s mean in the best possible way. All the tracks were cut in Nashville in 1958-59 and featured the same core band, augmented in various ways on selected tracks. Highlights include the crazed edge-of-mayhem piano on the aptly-titled “Crazy, Crazy Feeling” and the over-the-top semi-instrumental “Esquerita and the Voola.” What the hell the latter is about remains a mystery, but for sheer late 50s insanity it can’t be beat.

And who can resist a song titled “Believe Me When I Say Rock and Roll is Here to Stay?” I certainly can’t, especially when it features yet more violent., manic piano playing from Esquerita. Even when the sax takes a solo, he stays at it, flailing away under the sax break, adding some “whooo!” for good measure. While Esquerita was obviously possessed of technical prowess, precision was far from the goal: it’s all about feel, and bum notes only add to the authentically crazed delivery. When the Gardenias vocal group sings in tight formation, Esquerita plays even more loosely, perversely subverting any control the song might have had. Good for him, and the listener too.

On “I Need You” Esquerita answers the musical question: how-fast-can-you-play. The answer is: very. The band reacts appropriately, again eschewing precision for excitement, the latter of which is delivered in spades.

Wildcat Shakeout rarely slows its frenetic pace, but when it does, it’s still worthwhile. “Why Did it Take You So Long” finds Esquerita delivering a number in a rolling-chords Fats Domino style, but of course he whoops it up vocally to keep anybody from getting too relaxed. On the slow-n-bluesy “Please Come on Home” (on of three cuts on the CD recorded at RCA) Esquerita somehow manages to make his piano sound like a vibraphone. Probably by beating the hell out of it, somehow.

On “Just Another Lie” Esquerita sounds like a wholly different vocalist; while he still whops now and then, he exhibits a gospel-blues crooning style not found elsewhere on the disc; his range (vocally and instrumentally) turns out to have been quite impressive. A cover of Buddy Holly‘s “Maybe Baby” isn’t groundbreaking but does recast the song in what is now a familiar Esquerita mold.

The disc wraps up with the first two sides ever to include Esquerita. “The Rock-A-Round” and “Sweet Skinny Jenny” were tracks written and cut by Paul Peek from Gene Vincent’s Blue Caps, and the raucous numbers feature Esquerita on piano. In fact raucous doesn’t begin to describe the mayhem barely contained in “The Rock-A-Round.” All the players engage in wild delivery: this is punk, fifties style.

Dave Penny‘s brief but highly informative and intriguing liner notes put the music in context, and clue the interested listener into the sad story of Esquerita’s life, a story involving homelessness, drug dealing, AIDS and finally death in 1986. While Esquerita did record some additional material in the 60s (using a variety of noms de rock), the twenty sides on Wildcat Shakeout are the essential ones for rock fans. Anyone interested in the wilder side of 50s rock and roll need to give Wildcat Shakeout a spin.