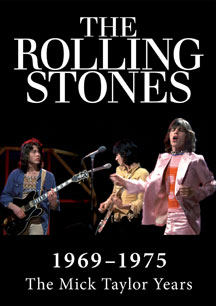 Being a music critic, it probably goes without much saying that I place some value in the opinions of other critics. Not all of them, mind you; but quite often I am interested in what informed, educated and thoughtful people have to say about music.

Lucky for me, then, that a whole passel of critics have lined up to weigh in on the merits (and, unsurprisingly) demerits of the Rolling Stones’ career for the period 1969-1974. The new DVD Rolling Stones 1969-1974: The Mick Taylor Years takes an in-depth and unflinching look at the Stones’ work during this period.

Kicking off with a contextualizing discussion about the departure (and subsequent death) of Brian Jones, the DVD quickly moves to focus on the integration of Mick Taylor as his replacement. Much is rightly made of Taylor’s abilities; comments from former employer John Mayall plus assorted music writers reinforce the point.

The compilers of the film seem quite keen on presenting a balanced and thoughtful assessment of the Stones’s work. The group’s problems with taxes, drugs and girlfriends are all discussed, but only insofar as those potentially lurid side-issues relate to the group’s output. As the DVD makes clear, those external pressures exerted great influence on the quality (and sometimes lack thereof) of the Stones’ music.

So, too, is Mick Jagger‘s metamorphosis into high society playboy, and the effect that change had upon his songwriting. The high points of the group’s work in this period are never neglected, but the film does not shy away from shining a light on the great influence that outside players had upon the group. Gram Parsons’ influence, for one, is discussed at some length.

The isolation within which the group sometimes operated is never made more clear than when discussing the recording of one of the Stones’s albums. Goats Head Soup may gave been recorded in the Caribbean, but the group’s insularity was such that no island influence is audible on the finished product. The critics whose opinions make up the bulk of the DVD’s content are quite unafraid to call out the Stones for, as the group itself would later admit, “sucking in the seventies.” So-called great albums like Exile on Main Street are thus critically taken down a peg, while lesser-known tracks like “Moonlight Mile” are offered up for re-evaluation.

A bit of the old ersatz music rears its audible head on the DVD. This seems to be a fixture of these sorts of productions: get some group to lay down some musical clichés, some musical shorthand for the group being discussed, and recycle those as a bed for some of the DVD narration. But in the Stones’ case, since their sound is so well trademarked, flipping a couple of chords ’round to avoid paying royalties still results in a very Stonesy-sounding instrumental bed. And besides, never let it be said that the Rolling Stones didn’t rip themselves off plenty often anyway.

The DVD ends with Taylor’s departure, explaining the reasons behind his exit. And perhaps unwittingly (or perhaps not) the film tacitly makes Taylor’s case for him to some extent: throughout long swaths of the DVD’s run time, though it’s subtitled “The Mick Taylor Years,” the guitarist rates barely a mention. So his feelings of being underutilized and under-credited seem validated.

The disc’s Stones coverage ends with 1974, and does so in a way that doesn’t encourage viewers that a future volume covering the rest of that decade and beyond will be especially interesting. And let’s face it: with the possible exception of Some Girls (if you like that kind of thing; I don’t much), the remainder of the Rolling Stones musical output is dreary, listless and mostly chases it own tail.

But the musical highlights of the Mick Taylor years are many, despite the spotty nature of the albums as whole. For anyone interested in a balanced, relatively comprehensive and just-provocative-enough look at this period of the group’s work, Rolling Stones 1969-1974: The Mick Taylor Years is recommended.