In the 1980s, Richard Barone led the alterna-pop/new wave group The Bongos. Since that time he’s remained busy producing other artists, recording and performing as a solo artist, and even writing a book. On the eve of the release of his long-awaited album Glow, I spoke at length with him about the album’s genesis, some gearhead-type stuff, and how he came to work with some legendary collaborators on the new record. 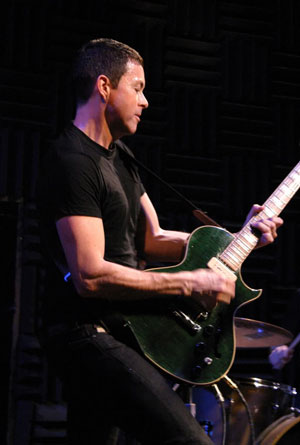 Bill Kopp: “Gravity’s Pull” is a shimmering pop song. Did it just sort of pop out of you, or to some extent did you say, “I need to write a song that has this feel, this vibe?”

Richard Barone: Like most of the songs on this record, I didn’t go into the studio with a song at all. I had the vibe and idea as I went into the studio. When I was working on this record with Tony Visconti, that was the sort of concept we had. Either one of us — because we cowrote a lot of these songs — would show up with the concept, but not the actual song. So we’d get to actually create it in the studio.So I came in that day, and I literally felt gravity’s pull that day on the way to the studio. It was a sensation that I hadn’t noticed before. So when Tony asked me how I was feeling, I said, “I’m fine. I’m feeling gravity’s pull, though.” And that’s how the song started; it was very natural. We started writing about it right then, right on the spot. And we recorded it that day.

And that’s kind of how we did this record. Almost every song that I did with Tony Visconti on the album, we had no song written before we started a session. I had always wanted to do that; I had heard that certain artists worked in that way. And I had never had that experience of sort of being on a tightrope, where you don’t know where it’s going to go.

You really have to trust your producer, and in this case I did, so I said, “Okay, let’s do it. We’re really going to be able to do it.”

Bill Kopp: There are real strings on this album. Certainly that adds to the complexity of recording, and to the expense. But there’s a quality you can’t get any other way. Did you have the concept of using a real string section to begin with, or was that something Visconti encouraged you to do? 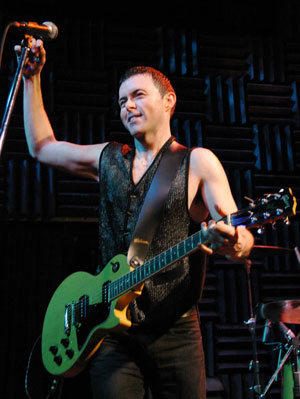 Richard Barone: We just knew right away that was how it had to be. Tony’s a great arranger, and I feel he’s the closest that we have to George Martin now. He’s musical in every sense of the word, as a producer. Not just the sound, not just the arrangement. Not just the composition, but the whole thing.

So as we were writing these songs, the arrangements developed as we were writing. We were using the recording program Apple Logic; that allowed us to arrange and change things around without any hassle. As we were working, we were arranging as we went along. As we came up with parts, we could do them right there. And luckily, between the two of us we know so many musicians. So we were able to call up and say, “Can you come play a cello?” or whatever. People would pop by and do their parts.

The idea of mixing Mellotron and [real] strings is something I started on Clouds Over Eden, the previous album I did. I had my Mellotron and combined it with cello and violin. And doing that was a suggestion from Van Dyke Parks to me. I had been talking to him about that part — about arranging the strings — and he lived in L.A. at the time. I was in New York, recording. And he made a lot of suggestion over the phone. And one of those was to use a small group of strings mixed with a Mellotron.

But Tony did it independently of that, so it was a natural thing for us to continue that process on this album. And we pushed it much farther than I did on the previous album.

Bill Kopp: It’s funny that you mention that. You’re the second person that I’ve spoken to recently who’s talked about that very approach. There’s a particular texture that you get when you mix real strings and Mellotron. There’s a kind of heavy retro band out of L.A. called Bigelf…

Richard Barone: I know them, yeah.

Bill Kopp: …and their leader Damon Fox owns something like four Mellotrons. And he told me the same thing: there’s a certain nasty wobble that you get from a Mellotron, and when you put those together, what you get is great. If you’re somebody like me who loves that sound, it makes the hair on the back of your neck stand up. 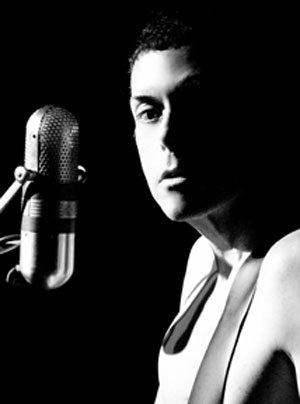 Richard Barone: It’s an amazing instrument. I worked with the producer Hugh Jones on Clouds Over Eden, and when he was young he worked for the Mellotron company [Streetly Electronics — ed.]. He recorded many of the tapes that were in the machine. And of course they’re all actual performances. So what you get is the sound that’s been put through the process of automation, the process of mechanization, being played on a keyboard. But you still get the performances, and whatever emotion there is in those performances. And you can create chords that maybe string players might not play together. They’re parts you might not normally write for strings, but on the keyboard you do. So you create new textures that way.

Bill Kopp: I’m a liner notes reader, and so I see that on the track “Girl” you used both Mellotron and Chamberlin? That’s almost perverse!

Richard Barone: What we love about the Chamberlin — which came a bit later than the Mellotron — is the recordings [in it] are a little bit better. The cello, especially. (I’m a liner notes reader too, and we tried to include as much detail in the notes for Glow.) We used the Chamberlin cello on that song; the sound has a very precise sound, and we mixed that with the Mellotron strings.

Bill Kopp: Whenever I read that someone has used a Mellotron on their record, if I get the chance I ask: a real one or a sample? They usually mumble “um, a sample.” But you use the real machine. So are you a glutton for punishment?

Richard Barone: I bought my Mellotron in the 90s. It was a beautifully maintained white M400 that had hardly ever been played since 1973. I happened to find it in New York, and that’s the instrument we used on this album. At the Magic Shop [recording studio] they had another black 400, one of the later ones, and it had a different motor in it, and different sounds. 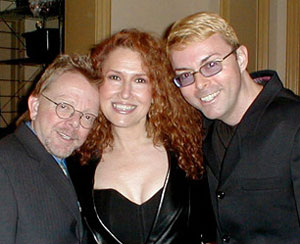 Richard Barone: It was always considered an expensive instrument, even when it first came out. Still is. It’s a handmade instrument, basically. You can see by the woodwork; it’s like a handmade vintage car…

Richard Barone: A very English car. With the serial number hand-inscribed on each part. I love it.

Bill Kopp: I see Dennis Diken plays on “Gravity’s Pull.” Besides being one of the nicest people I’ve ever met, he’s — to me — the very embodiment of tasteful drumming.

Richard Barone: He is.

Bill Kopp: He never overplays, and he seems to have an innate sense of what a song needs. So on the tracks where you did bring in other players beside yourself and Tony, how much direction did you give on these songs? Did you chart it out very loosely, or did you say, “Play this?”

Richard Barone: Like I said, when we wrote the songs, we were arranging them in our head as we did them. So we had the part basically worked out for anybody who came in. But — and Tony and I are very similar in this way — we encouraged the musicians to bring their own style and flavor to what they play. So while we know what we want, within those parameters there’s a lot of freedom to play.

For instance, on “Gravity’s Pull” we were interested in having the kick drum do a certain thing. So that’s the kind of direction we might give, so the bass drum doesn’t have just the standard [makes “boom” sound]. It has a certain pattern to it. Usually what’s important for the drums for Tony and I — and it’s always been important on his records — is that the bass drum has its certain little part.

And that’s very important now, in 2010. So much of pop music now is based on the bass drum. People talk about “beats” on a pop record. And what they’re talking about is what the bass drum is doing. It’s not as straight-ahead as it would have been in the past. And one of the things that makes this record more competitive with contemporary sounds is that our bass drum patterns are more intricate than what might have happened ten years ago. 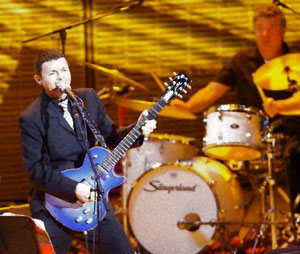 Bill Kopp: I appreciate that you mention that. Because as I listen to the album, there’s a classicist vibe to a lot of the songs, but there’s something — and I couldn’t quite put my finger on it — sort of modern about it.

Richard Barone: Tony and I — and [producer] Steve Rosenthal also — would talk about how melodies are classic, and guitar sounds are classic. But what really changes in each era, each decade, are the beats. The rhythms. And I think what we’ve done on this record is to have classic melodies and song structures, but the beats are contemporary. The beats are written into the songs. On “Gravity’s Pull,” for example, the bass drum hits when certain words hit. The casual listener doesn’t have to notice all that. But we kind of wrote the songs form the bottom up.

Bill Kopp: That’s one of the cool things about good songs. You can sort of let them wash over you, and enjoy them for what they are. Or you can pick them apart and appreciate the components. And if a song holds up to that kind of listening, then you’ve got something.

Richard Barone: I should add something here. I’ve been fortunate to have around me some amazing mentors. Tony and my other producers, obviously. But also, Garth Hudson from The Band is a good friend of mine. And he’s someone like that — he notices parts of songs –and he’ll call me and say, “Let’s add a trombone part” to a particular song. He sort of finds what makes pop music interesting. And that gets my mind going. And it makes it interesting for all of us: for myself as well as the listener.