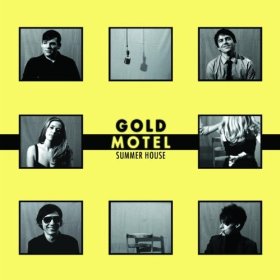 I’m pretty sure I’m no sexist, but for whatever reason, female vocalists have to jump a pretty high bar to give me any joy. There are certainly exceptions, artists whose work is exceptional regardless of gender: Aretha Franklin, Grace Slick, Sharon Jones, Nina Persson and many others quickly come to mind. But in the same way that some people don’t especially dig the violin, the female voice isn’t at the very top of my favorite instruments.

With that baggage in tow, I’m less likely than the average reviewer to have my interest piqued when hearing about a new pop group with a female singer. The images that immediately fill my imagination are ones of Patty Smyth (Scandal), Madonna and worse. Dreadful songs by dreadful pop tarts don’t much impress me.

I’m also rarely swayed by press releases, no matter how well-written. But something in the bio of a band called Gold Motel caught my eye. Maybe it was the phrase “power pop;” that term is rarely bandied about by anyone trying to, y’know, actually shift units, but it’s a longtime favorite genre of mine. And the name-checking of influences to include Elvis Costello and Diana Ross & the Supremes…well, that pushed things over into let’s-at-least-check-this-band-out territory for me.

Thank goodness it did, because Gold Motel’s debut album Summer House is now officially shortlisted for my Best of 2010 list, and it’s only September.

The musical approach of Gold Motel has characteristics that will be familiar to fans of late 70s/early 80s new wave acts like Blondie, but then, too, does the band echo the vibe of 60s girl-groups and modern rock. In short, they sound familiar and new at once. Skittering herky-jerk arrangements like the one on the album’s kickoff track “We’re On the Run” are similar in places to early XTC. Bursts of thickly-chorded guitar channel arena rock. But Greta Morgan‘s cool, soulful-yet-detached vocal delivery has more in common with music’s most assured vocalists; she sounds like she only breaks a sweat singing when she chooses to do so.

Morgan’s clear-as-a-bell voice would likely be the aural centerpiece of Gold Motel’s sound even if it weren’t mixed so much to the fore as it is on this disc. Her sparkling keyboards use a wide array of sounds, all of which work well.

In truth, there’s not a weak song on Summer House. “Safe in L.A.” is a standout among strong tunes; like many of the album’s ten cuts, it shows the band is not afraid to make use of pop traditions like tambourine and handclaps to push the happy vibe. And on that song’s choruses, Morgan sounds uncannily like another quality artist, KT Tunstall. But for the most part, the group has it both ways: they evoke the feel and emotion of classic groups while sounding not too much like any one of them. Gold Motel is not a band about which you’ll find yourself saying, “Yeah, they’re good, but they’re a bit too much like [fill in the blank].”

There’s plenty of texture on the album. “Stealing the Moonlight” has it all: acoustic guitar picking intro, strident power chords, male/female call/response vocal arrangement, clever vocal harmonies. And all those qualities reveal themselves within the first sixty seconds of the song.

The melodrama of “Fireworks After Midnight” would be at home on an A Camp album, but Gold Motel display more range than that one style; the following track “Don’t Send the Searchlights” adorns a romantic melody with a slashing, Clash-like rhythm guitar. And the ooh-and-aah backing vocals add the just right timeless feel.

There’s an impressive sense of dynamics throughout the disc. Nearly every song has a fast section, a breakdown, etc., but never do the elements seem there for their own sake, or simply to impress. The intro to “Make Me Stay” is vaguely reminiscent of Toto‘s “Hold the Line,” but the song makes subtle use of 60s combo-organ styled keys and — get this — highly catchy slide guitar. Here, think more America or George Harrison, not the Allman Brothers. Yet despite all those 70s touchstones, the track ends up with a decidedly modern rock feel. How’d that happen? Impressive.

“The Cruel One” takes a piano-centric page from the Jellyfish playbook, and the song sounds like it’s destined for the next iPod commercial.

Maybe it’s here just to show that Gold Motel doesn’t have to always rock-pop it out, but the brief “Who Will I Be Tonight” has a simple-yet-lush aesthetic built around electric piano and moaning, ghostly guitar figures. The net effect of the torchy song evokes Weimar Germany, or Brecht-Weill. Or something.

At ten tracks and thirty minutes Summer House will leave the listener hungry for more, but then that’s good marketing, isn’t it? The album closer is the title track, and the guitar that frames the song does have that undeniable summer feel. A strong beat and bouncy vibe alternate with a powerpop chug, and as the song unfolds, more ingredients are thrown into the mix, including some heavenly ooohs. (Can never get enough of those).

A near-perfect balance of pop sensibility and serious musicianship and songwriting, Gold Motel’s Summer House should be on the must-have list of any lover of modern or classic pop music.