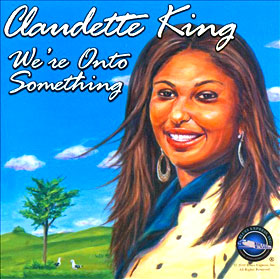 Yes, I know, I know. Return visitors to this site may notice that quite a few of my album reviews begin with a brief (or not-so-brief) section in which I essentially say, “I had plenty of reasons not to dig this, but…”

And here we go again. When We’re Onto Something, a blues album by a singer named Claudette King found its way onto my desk, I wasn’t sure what to make of it. I try not to judge an album by its cover, but the color chalk drawing of the artist outdoors (complete with what look like ducks or pigeons) gave me pause. And the basic-set typeface title emblazoned across it didn’t settle my concerns, either.

A quick look at the songwriting credits showed that more than half of the tracks were co-composed by one Alan Mirikitani, a name I recalled (I do read liner notes!) from another release on the Blues Express label, Looking for a Party by Long John Hunter. Come to think about it, I’ll bet the same artist drew the cover for that album, too.

Add to that the fact that both albums share the same producers, and that half of Claudette King’s tracks feature the Dawwg House Rhythm Section, the band that backs up Hunter on his set. A logical conclusion might be that this album is a low-budget affair.

But wait: let’s not get ahead of ourselves here, right? Time to pop the CD out of the case. Whoa, what’s this? Under the CD there’s a clear plastic tray. And the inset card shows a picture of the artist with a blues legend. It’s B.B. King; oh, that’s nice.

But in the same way that low-budget small label does not necessarily equal mediocrity, neither does genetic commonality with a giant of American music connote quality. So I listen.

Turns out We’re Onto Something serves up eleven tracks that showcase reasonable variety, consistent quality and prominent, thoughtful placement of Claudette King’s talents. Whether it’s a walking blues like a cover of Robert Cray‘s “Playing With My Friends” or the gospel-flavored late-night vibe of “This Ain’t How I Planned It,” the album shows the range of styles to which King can apply her voice.

The extensive liner notes make reference to an earlier project King released an unspecified number of years ago (best guess: mid 90s). For this album, the instrumental tracks from four of those songs were brought back into the studio; there King recorded new vocal tracks. Honestly, there’s little sonic difference between the old and new tracks.

We’re Onto Something certainly isn’t all straight blues; there are elements of all sort of other styles woven in and out of the mix, for an overall feel not at all unlike the Fabulous Thunderbirds. For the most part, the instrumentation exists as a bed for King’s pipes, but occasionally a tasty solo crops up. The wah-wah guitar solo on “A Dog Like You” is a good if understated example.

The album’s only weak spot is the inclusion of a shamelessly derivative track, and it pilfers (consciously or otherwise; I review but do not judge) from a perhaps unlikely source. The one-chord “Boogie Some” — written by album coproducers Mirikitani and Dennis Walker — cops everything that’s not nailed down from the Pretenders’ 1980 hit “Brass in Pocket,” right down to the insistent lyrical device of gonna-this-gonna-that. It’s a disappointing distraction.

When it comes to horn sections, this reviewer finds that most fall into one of two camps. The first is the Mar-keys; the second, the SNL band. The first propels songs forward, and often takes the effective role of a backing vocal section. The latter reminds you to wake up — you dozed off during the last (reliably lousy) thirty minutes of Saturday Night Live, and now, with the credits rolling, it’s time to grab the remote and turn the TV off. While they play well, the horn guys on We’re Onto Something lean ever-so-slightly into the SNL camp.

But any question as to whether Claudette King herself can bring the goods is laid to rest on “Easier Alone.” While the arrangement has a cocktail lounge feel, Ms. King’s voice takes it somewhere special, somewhere it simply couldn’t go without her.

A surprising highlight of the disc is “Isn’t Peace the Least We Can Do,” a song in what can best be called a gospel shuffle style. Co-composer Jim Pugh‘s understated organ solo channels Billy Preston. A few more tracks like this (and a few less of the “Boogie Some” variety) and this album would be an unqualified success.

But when one gets right down to it, the enjoyment of an album such as this comes to this: does the listener enjoy blues-inflected vocals out in front of a precise yet emotive electric backing band? If the answer’s yes, there’s plenty of enjoyment to be found within the (virtual) grooves of We’re Onto Something.