“Hello. We are The Pixies.”

That was the puckish greeting that Gustav Estjes — leader of Swedish folkrockpsych quartet Dungen proffered to the audience on a recent Saturday night at Asheville North Carolina’s Grey Eagle. This was either the third or fourth visit the group has made here; neither their tour manager nor I could decide which. But it’s clear that — as Estjes told me after the show — they “love Asheville.”

Good thing, that. Because as a direct result of an unfortunate confluence of events, Dungen’s Asheville show was — as Estjes so wryly intimated — scheduled opposite a Pixies concert at the Thomas Wolfe Auditorium, a scant mile away. So it was that Dungen played to a crowd of about sixty. For those in attendance, it was great, almost like a private show. And while one might think the band would be disappointed, they seemed to take it all in stride, getting down to the business of making music. 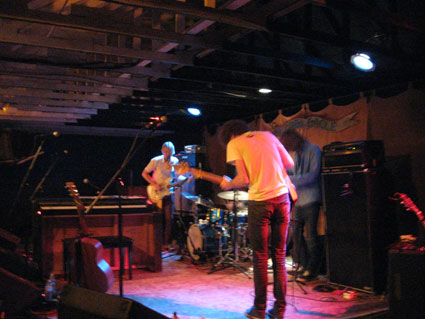 The stage at the Grey Eagle is little more than a foot above the audience floor, and the Dungen show was a standing show. So everyone in the crowd got a close-up look at the onstage activity. Estjes’ musical arsenal included a digital piano; an acoustic and ES-335-style hollow body electric guitar; a flute; and a tambourine. From song to song Estjes would switch between instruments, and several times he made multiple instrument changes during a single song. The piano was set up perpendicular to the stage, with enough room behind it for Estjes to wander — tambourine in hand — over to where guitarist Reine Fiske was set up.

Fiske is one of few players working today who effectively make onstage use of controlled feedback. With his well-worn Stratocaster, he spent large chunks of the set with his back to the audience. He did this not out of any shyness but rather to coax feedback from his amplifier, carefully stacked atop its road case to bring it in line with Fiske’s guitar. It’s one thing to simply produce feedback; there are digital pedals for that. But to create and control that unruly beast takes thought and concentration. At several points throughout the show, Reine Fiske produced squalls of feedback in his solos. Sometimes the goal was a lead part; other times the feedback served as an almost ambient bed for the other sounds being made onstage. Fiske spent little time trying to impress the most obvious way (i.e. playing fast); though doing so is clearly within his bag of tricks, he focused instead on sculpting a particular tone to suit each piece. 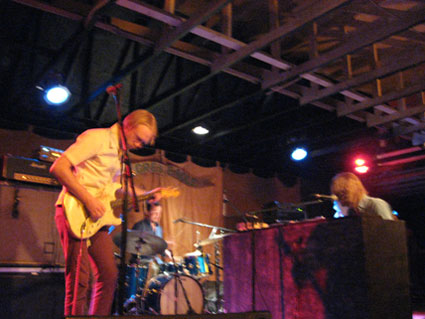 Drummer Johan Holmegard brings a strong jazz sensibility to Dungen. At the Grey Eagle his smallish drum kit was set up with a low profile (everything as low to the floor as possible), and his drum skins seemed tuned to their loosest tension. His creative fills punctuated a style that was forceful and subtle as each song demanded; few songs were set up for playing in one style all the way through. Holmegard maintained careful eye contact with his band mates, and that connection reaped dividends as the band occasionally went off on a brief musical exploratory excursion. The thread was never lost.

Bassist Mattias Gustavson maintained a low-key visual presence throughout the set, minding his musical business. But his thunderous bass lines often as not served the role of rhythm guitar or second lead guitar. 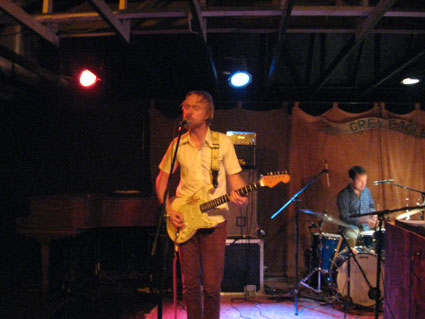 The band’s set concentrated primarily on material from their latest (Skit I Allt) and 2008’s 4, their fifth album (that confusion is explained here). The song selection presented all three major sides of the band: straightforward, highly melodic and hook laden almost-pop songs; long, atmospheric mood pieces that would sound right at home on an expanded reissue of Pink Floyd‘s A Saucerful of Secrets or Ummagumma; and wild guitar freakout/noisefests. In barely over an hour the group managed to display their expertise in all of these styles, and — perhaps most remarkably — they managed to make all these styles hang together as a cohesive whole.

Between songs, Estjes joked with the crowd, made a few references to his discovery of the beverage kombucha during his last visit to Asheville, and emanated good vibes. He and the rest of the band were clearly enjoying themselves. 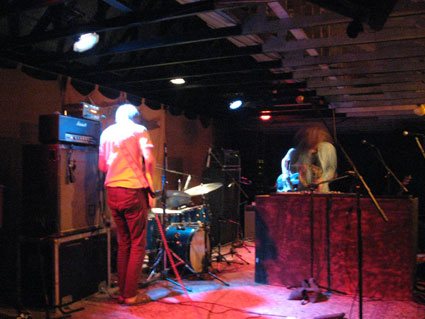 When the band finished their set, the small crowd mustered all the noise it could manage to lure them back for an encore. Fiske needed some time to replace a broken guitar string, and while that was going on Estjes again exited the stage for a break. To keep the momentum going (and/or to amuse themselves) the Dungen rhythm section of Holmegard and Gustavson treated the audience to a playful bit of piano/drums jazz interplay. Not a song so much as a musical dialogue, it was an unexpected and slightly odd yet delightful interlude.

For the sake of the band, this writer does wish that a larger crowd had turned out for the Grey Eagle show. But strictly from the standpoint of a concertgoer on a specific night, a private audience with Dungen is among the best musical treats imaginable. Here’s hoping that the group’s love of this little mountain city will override any concerns of low turnout, and that the band will soon make its way back to Asheville. 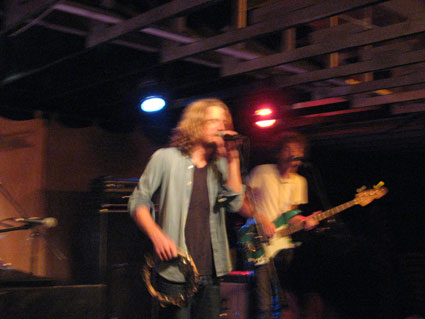