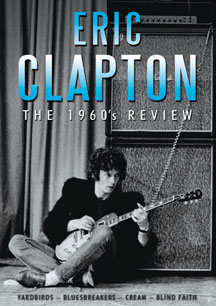 Here’s a question for you: Do you like Eric Clapton‘s work, yet feel that his creative period reached its apex in the 1960s? If so — or even if you only answer “yes” to the first half of that question — and if your interest goes beyond simply listening to the songs, then the new DVD Eric Clapton: The 1960s Review is for you.

No, Clapton himself isn’t involved in this project. Yes, he appears briefly a few times via archival interviews to weigh in on the matters discussed. But the documentary covers the bases without his direct input. Compiled by people who actually understand Clapton’s work (and that of the bands in which he played) The 1960s Review delves into the somewhat circuitous career path Clapton followed in that decade, and gamely attempts to make sense of it all.

Through archival footage, stills and talking-head interviews and analysis, the DVD charts Clapton’s history through the 1960s. The approach the filmmakers have taken doesn’t shy away from what look like inconsistencies in Clapton’s approach; the supposed “blues purist” is shown time and again to have made career moves that weren’t consistent with any such purism. Yet in context his career seems more linear than scattershot; perhaps hindsight can’t help but color our impressions.

It’s interesting to observe the input of some who knew and played with Clapton in the early 60s; some of them readily offer the observation that he wasn’t all that great of a guitarist early on (no one debates that he didn’t quickly become one, though). In addition to spots featuring Yardbirds members and John Mayall, the usual suspects weigh in with their analysis.

Watching the film, one might initially think the compilers forgot some important part of the story. Where, for example, is any mention of Powerhouse, the (extremely) short-lived aggregation featuring Eric Clapton and Steve Winwood? That group cut a handful of tracks right before Cream made their debut. The answer is: in the bonus material. One suspects that the makers of the DVD knew that only hardcore 60s music fans would know (and/or care?) about such things, so they included the treatment of that subject in the bonus section. Ultimately that’s a reasonable approach, since spending ten minutes on Powerhouse would diminish the pacing and flow of the main feature on this (expertly-paced) DVD.

Of particular interest is the analysis and reminiscing of Paul Jones (ex-Manfred Mann). This reviewer wasn’t aware of the Zelig-like omnipresence of Jones in the music scene of the time. Young’s warm and mischievous tale-telling is a highlight of the disc. Also fascinating is recording engineer Bill Halverson‘s discussion of Cream’s Goodbye sessions.

As always, there are a few mistakes. One of them is egregious. Music historian Alan Clayson — normally a dependable expert on such matters — would have us believe that Cream producer Felix Pappalardi was involved with the Rascals. No, Alan, that’s Felix Cavaliere. It’s a rookie mistake akin to confusing John Bonham with Jon Bon Jovi, and one wonders why no one caught it and excised it from the interview.

But in the larger context, that’s a minor flaw. This DVD is well-put together, and presents a career overview that satisfies on several levels. One, it’s a good introduction for those who are interested in Clapton but don’t know the history. Two, the DVD provides enough trivia and information from those who were really there to make it of significant interest to the more serious fan. And three — especially for an “unauthorized” production, there’s a healthy amount of actual music. For anyone with an interest in 60s British music beyond the Beatles, Eric Clapton: The 1960s Review is highly recommended.