On Newsstands: “Day of the Remains” 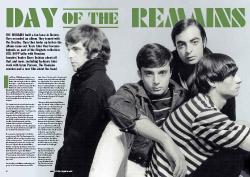 The September-October issue of London-based Shindig! Magazine is (theoretically) on newsstands now. In addition to worthy stories by other writers, the issue prominently features my story of the Remains. Based on a lengthy in-person conversation I had last summer with Remains founder Barry Tashian, the piece…well…let’s just look at the promo blurb from Shindig!

They built a fan base in Boston. They recorded an album. They toured with The Beatles. Then they broke up before the album came out. Years later they became legends as part of the Nuggets collection. Bill Kopp talks with Remains founder/leader Barry Tashian about all that and more, including Tashian’s later work with Gram Parsons, The Remains reunion and a new film about the band.

Available for purchase here. You can also read an “outtake” of sorts from the feature (not included in the magazine) here.