Continued from Part One, of course…

Bill Kopp: How would you describe — what is it that you deliver with the Fabulous Thunderbirds that’s different than what you do with Kim Wilson’s Blues All-stars? 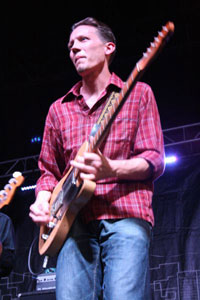 Kim Wilson: That’s easy. [The Fabulous Thunderbirds] is just a hybrid of a lot of different things. It’s Americana, it’s all of those musics put together.  Whereas the solo thing, that is straight Chicago stuff. We vary it a little with that thing, but this is really a lot of different musical genres.

It’s a concept that I’ve had since I was a kid. It was out of necessity at first, ‘cause I would have to play a lot of soul beats to get people up and dance. Then I could play some blues.

If you look at that first James Cotton record on Verve, that really kind of confirmed everything for me. He was really a huge inspiration in a lot of ways to me. Harmonica, of course. But he was a great singer. He was doing “Blues in My Sleep,” he was doing “Knock on Wood,” “Turn On Your Lovelight,” “Don’t Start Me Talkin’” by Sonny Boy Williamson. All these different musical things. So I said, “Yeah!”

[Our conversation turns to Stax artists; everybody’s talking at once.]

Kim Wilson: That’s when they were makin’ records. A lot of texture was comin’ out of these guys. And all they did, really, was turn on the tape recorder and play. Instead of something that’s “produced.” And that’s what I want to get back to with the new thing.  I’ve got this thing now that you have [a new CD of eleven songs, sold at shows – ed.] and it’s very close. But it’s gonna change. I may re-cut the whole thing on analog.

Bill Kopp: That was my next question. So is or isn’t this your new album?

Kim Wilson: It’s supposed to be, but we weren’t done with it. And we knew we weren’t. But since we paid for it…

Bill Kopp: Yeah, what the hell. In the meantime, something is better than nothing. 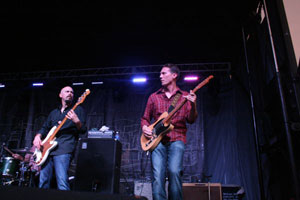 Kim Wilson: A good example [of a sound I like] is the Black Keys. They’re an interesting bunch, sonically. I saw ‘em on Leno the other night, and I really enjoyed them. I thought, “There’s some guys who’ve really picked up the essence of what music is.” I like the guy’s voice, and he was playing this way-cool Supro guitar. They’re another band that’s a hybrid: it’s not blues, but it has the essence of all those things. You’ve got to know blues – and a lot of other things – to be able to play the way that they play. There are very few people who can do that and get away with it commercially. That’s the kind of thing we’ve done in the past, and that’s what we’re really ready to do now. If this was 1985, we’d be in the Top 20. But there is no Top 20 any more.

Bill Kopp: I saw you guys – sort of like that drunk guy in the autograph line was saying to you – open for Double Trouble at the Fox Theatre in Atlanta. It was the night before Stevie Ray went into rehab. He went into Peachford [Behavioral Health Systems].

Bill Kopp: That was sort of the commercial apex for the band, but what you do now continues to be really interesting.

Kim Wilson: What we’re doing now really has progressed to a point where people really allow me to sing. Which has never really happened until now. I mean, here I am, 59 fuckin’ years old, and I’m just finally learnin’ how.

This kind of music is all about being a journeyman musician. It takes your whole life to do what you need to do. There are a lot of people who are young, who have a lot of potential. You can see it coming, coming, coming, and then: where did it go? I think it’s great to be at a certain age – like me – and get to the point where it’s like a rebirth. Where you can stand yourself, the things that you do. 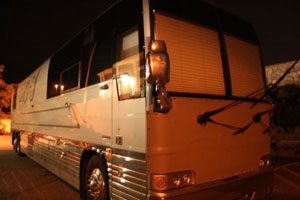 You’re always experimenting with different techniques. You’re always listening to the old records, trying to pick up the essence of the things. I’ve been listening to some Ray Charles lately, and other singers. I enjoy that stuff, and I’m learning. Always learning. The object is, maybe at this stage of my life, maybe I’ve busted my head through the basement of that peer group that I want to be in. Guys that I’ve revered all my life and have played with. And if I had done that when I was, maybe, 25, I’d be done.

Kim Wilson: You gotta realize, when I was 25, I was like someone who was sixteen. It was another time. That whole extension of how kids grow up fast these days, it extended into my twenties and thirties. And it worked out okay for me. I’m havin’ fun, I’m very excited about music, and I’m very excited about being good at it.

Bill Kopp: That comes through onstage.

Bill Kopp: Looking at your tour itinerary, it seems like you have a varied lineup of festivals and types of venues. Do you tweak the set depending on the gig?

Bill Kopp: You guys don’t go into a huddle between songs. That would be super-unprofessional: “Excuse us a moment while we discuss what our next song is going to be.”

Kim Wilson: I just holler ‘em out. But [chuckles] we’ve got a real problem with Johnny Moeller. I holler out the song to him, and he’s goin’, “What?!” And I’m thinking, “Can’t this guy read my fuckin’ lips?”

Johnny Moeller: Everyone else does!

Kim Wilson: I’m doing all these signs to him [makes wild hand gestures]. And then he finally comes up to me, and I tell him.

Johnny Moeller: I think it pays to be as deaf as you are!

Kim Wilson [to the whole band]: Believe me: you’ll all be wearin’ fuckin’ hearing aids by the time you’re my age. I’ve got twenty years on the oldest of these bunch of guys. [laughs all around] 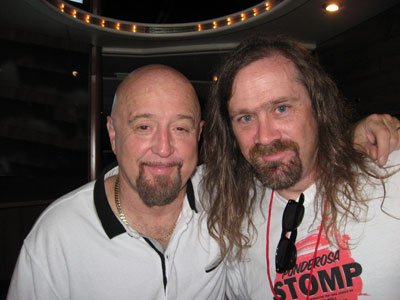