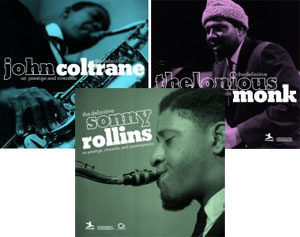 I’ll be the first to admit that I know little about modern jazz. I’m no expert on its history, I can’t readily name well-known instrumental classics simply by hearing them, and I certainly can’t play the stuff on my keyboards. I’m a decidedly rock/pop guy, and generally like my music straightforward. So needless to say, if you’re looking for authoritative analyses of jazz recordings, this site should not be your first stop.

But like most avid listeners, I do know what I like, and I try to keep an open mind. It was with those two ideas in mind that I removed the shrinkwrap from three upcoming Concord releases. These three titles — each a 2cd set with extensive, authoritative liner notes (always important to me, those) — all use the word definitive in their titles. Surveying the works of three jazz giants — John Coltrane (tenor saxophone), Sonny Rollins (also tenor sax) and Thelonious Monk (piano) — as recorded for the Prestige and Riverside labels (and for Rollins, add Contemporary to that list), these sets are positioned as introductions of a sort to these musicians.

The Definitive John Coltrane on Prestige and Riverside collects twenty-one sides from the period 1955-1958. Several of these numbers weren’t released as Coltrane tracks; rather they showcase his work as an able and featured sideman with Miles Davis and Monk, and as part of a modern jazz supergroup. 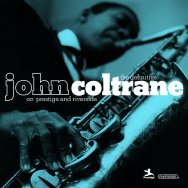 As with much jazz of this period, the arrangements aren’t strong on what rock and pop listeners think of as melody. The songs are workouts, showcases, for exploratory performances. Recorded with little if any overdubs, the songs capture the one-take excitement of a band blowing at their best. There’s just enough musical underpinning to hold things together; the players are intuitive enough to pay incredibly sympathetic attention to one another as they take their solo turns. The music never falls apart.

In the late 50s Coltrane was establishing his reputation as (among other things) an excellent interpreter of others’ work. In fact there’s but one original composition (“Straight Street”) on this set. But when Coltrane blows, he makes the songs his own. There are few five-and-a-half minute periods in jazz as exciting as the Tadd Dameron piece “Mating Call.” Like much of the music on this set, it’s accessible and demanding all at once.

There are a few standards here, and a handful of well-known tunes (“‘Round Midnight,” “Monk’s Mood”) but most of these songs will not be familiar to the casual jazz fan. Belying the fact that all the numbers were recorded in a 36-month period, there’s a dizzying display of versatility on these tracks. Overall, they’re of the sort that can be enjoyed on multiple levels: as a soundtrack for whatever else you’re up to (say, writing a review), as accompaniment to a thorough read through Ashley Kahn‘s liner notes, or for close, intense listening and appreciation. As an introduction to the early works of Coltrane, this set is wholly successful. 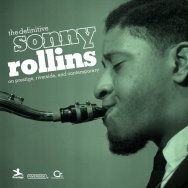 Tenor Saxophonist Sonny Rollins gets similar treatment on The Definitive Sonny Rollins on Prestige, Riverside and Contemporary. As displayed here — and despite his reputation — Rollins’ approach is occasionally a few notches more toward pop accessibility than is Coltrane’s. But that’s not to take away at all from the genius of Rollins’ playing. From the brief but impossibly upbeat “Mambo Bounce” to “In a Sentimental Mood,” the disc manages to cover two distant stylistic poles. And both work brilliantly. Rollins gets plenty adventurous on these tracks, displaying a versatility (and, it would seem, a willingness) to engage in both the pop and arty sides of modern jazz. The opening of “Paradox” may even cause listeners to want to dance. (During Max Roach‘s crazy drum solo, not so much. But wow.) The list of artists included on these sides reads like a who’s-who of 50s jazz, and that’s not surprising: there was a great deal of interplay and cooperation among the top players of the era.

To the jazz novitiate, one of the most amazing characteristics of this music is the rhythm section. The (upright) bass, played on several tracks by Percy Heath, is a thing to behold. It carries its own melody, remaining just barely inside the framework of the song. Yet it fulfills the role that rock and pop enthusiasts expect of a bass. Exponentially busier than its rock corollary, the bass on these Rollins sides is nothing short of amazing.

As with the Coltrane tracks, the listener can pick the tracks apart and appreciate the components that went in to make them so memorable, innovative and influential. Or they can step back and let the awesomeness of the numbers wash over them. It all works. For the music enthusiast whose jazz collection is slim, this title makes a welcome addition, and a useful introduction into the 1950s work of Sonny Rollins. He’s still at it today. 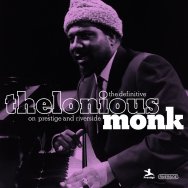 Ashley Kahn’s illuminating liner notes for The Definitive Thelonious Monk on Prestige and Riverside helped me know what to listen for to more fully appreciate what makes the pianist’s work so special. Kahn makes note of Monk’s “liberal use of hesitation,” and I found that a useful touchstone. It reminded me of something that Stu Cook — bassist for Creedence Clearwater Revival, an act most would assume to have little or nothing in common with Thelonious Monk — told me a few years ago: “The spaces between the notes may be more important, because they help focus where the notes are. And that’s the cool thing. If there’s just a steady stream of notes, everything is all one color. But when you start to mix it up, let it ‘breathe,’ that’s when the magic comes into it.”

The twenty-one tracks on this 2cd set span the period 1952-1960, and draw from an impressive succession of albums. Though Monk had already been recording (his first sides were cut in 1944), the Prestige and Riverside tracks find him fully hitting his stride.

Time has a way of softening the edges. I’m reminded of how alien the Sex Pistols (sorry — I’m a rock guy!) sounded when I first heard them in the 70s. Hearing those cuts now, of course they’re still full of power, but it’s difficult to appreciate how revolutionary they once sounded. And so it is with Monk. While the music is vibrant, exciting, unpredictable, it doesn’t feel as “difficult” and some might suggest. Monk’s music — as collected here — is actually quite warm and inviting.

Duke Ellington‘s classic “Caravan” is here, presented by a trio. And “‘Round Midnight” makes a well-deserved appearance. (There is a tiny bit of overlap in the content among the three two-disc sets covered here, but not enough to come anywhere close to rendering any one redundant.) The incredibly melodic “Blue Monk” is also served up by a trio including the aforementioned Percy Heath plus the inimitable Art Blakey. It’s worth noting that while I am not very familiar with Blakey’s work, after hearing his playing on these discs, I’m very interested to hear more of him.

Which, is the point. In all likelihood, listening to any or all of these Definitive series set will lead to one of two outcomes: you’ll decide the artist is not for you, or you’ll be hungry for more. And at its heart, that’s the goal of set like these. All three are thus highly recommended to anyone musically open-minded and unfamiliar with this music. There are hours and hours of joy to be found within these discs.