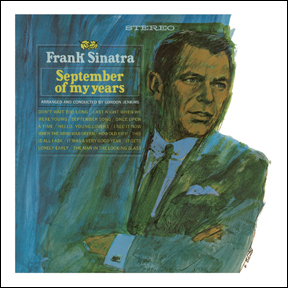 In retrospect it’s a bit surprising that Frank Sinatra chose to make an album called September of My Years in 1965. The title song and the overall song selection have the unmistakable air of an end-of-career look back. Sinatra was a mere fifty years old in ’65, and would continue to record for many years after this release.

But here it is, reissued in 2010. Featuring sympathetic, knowing arrangements from the master, Gordon Jenkins, September of My Years focuses on Sinatra’s strengths. There’s a bit of mannered delivery here and there, but overall the singer plays it straight and heartfelt. Four Grammy® awards went to this album.

Sinatra albums always sort of existed in a world of their own. Rock music was nearing its peak, and was beginning to be taken seriously by critics in 1965, but none of that had any effect on this old-school recording. The sweeping emotional strings on cuts like “How Old Am I?” may not have impressed rock fans of the day, but the music has withstood the test of time.

Unlike some Sinatra albums, there are few if any missteps on September of My Years. While the album’s aesthetic precludes the inclusion of any big band swing arrangements, the melancholy, reflective vibe is extremely effective at achieving a mood. A strong emphasis on melody pervades the album, and the arrangements favor an approach that puts the responsibility for that melody squarely on Sinatra. The instruments serve as sympathetic backing. While they’re tasteful and perfect, a no-vocals remix of this album wouldn’t hold nearly as much interest.

On “Last Night When We Were Young” there’s the subtlest hint of Sintara’a voice wavering, but since the man was such a master, it seems intentional, designed to deliver the lump-in-the-throat of emotion.

Occasionally the lyrics are mawkish, forced, dopey: “How’s your sacroiliac?” But Sinatra delivers them with conviction, or at least consummate professionalism. And “It Was a Very Good Year” was such a monster hit that everyone knew it in ’65, even if they had no use for “adult” music. The song’s bittersweet and wistful lyrics, while a bit sentimental, still hit their target with precision.

Listeners looking for sonic variety will be disappointed, but then that’s not the goal of September of My Years. The album is deliberately paced, full of sweeping balladeering. Sinatra’s vocals are out front, where they belong.

Two bonus tracks are included. A live version of “This is All I Ask” dates from 1984. Nice enough, but hearing how Sinatra delivered the song in the mid 60s might have been more revelatory, and ultimately more interesting. Still, Sinatra does make a point in his introduction of giving props to Gordon Jenkins. The single version of “How Old Am I” doesn’t differ greatly form the album version, but here it includes a bit of pre- and post-song studio chatter.

Some people like Stan Cornyn‘s writing style. In fact the Grammy® judges in 1965 are included in that group: one of the awards went to him for his liner notes. Me, not so much. In Cornyn’s new notes for the Concord reissue, he starts off with this gem: “Forty-five years ago, most of the people who made this album were alive.” Cornyn’s so pleased with himself that he repeats the line at the end of his essay. No, really? Dead people rarely record albums. That sort of too cute-by-half writing style pervades the essay. (If you dig that, you swingin’ hip daddy-o you, don’t miss Cornyn’s liners from Sinatra/Jobim – The Complete Reprise Recordings.) In any event, wade through the self-conscious prose and you’ll find the sort of info that liner notes readers want.

It’s a neat trick, really, to deliver album after album of songs written by other people, arranged by other people, played and produced by other people. It’s more difficult still to do so in a way that still bears the unmistakable stamp of the vocalist. Sinatra’s talent is of the level that doing so seems effortless. As a clutch of emotional songs delivered with the perfect balance of pathos and musing, September of My Years is a perfect record.