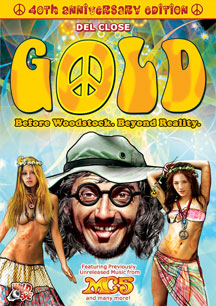 It’s hard to know exactly what to do with this film. Made in 1968 (but presumably re-titled later since Woodstock was in summer ’69), the theatrical feature Gold: Before Woodstock. Beyond Reality. is a mishmash. But that was sort of the intention. Based on the thinnest of plots, the movie follows the exploits of a band of stoned hippies as they make their way into a remote campground-sort of thing.

The movie is notable (assuming that it actually is notable) for two things: its soundtrack and its star. The soundtrack includes otherwise-unreleased material by the MC5 plus songs from Rambin’ Jack Elliot and Barry St. John. None of it ranks among those artists’ finest work, but it’s all serviceable music that fits reasonably well with the mood of the film. Said mood is, mostly: “completely stoned.” A couple tracks seem to work especially well, so the filmmakers use them over and over. And over. The soundtrack also includes (without crediting it as such) the Nice‘s incendiary version of Bernstein‘s West Side Story number “America.”

The star of the film, to the extent that there is a star, is Del Close (billed in the film, inexplicably, as Del Clos). A highly influential force upon American improvisational theatre, Close mentored a long list of well-known comic actors including most of the original casts of Saturday Night Live, SCTV and other prominent names. During the period this film was made, Close was, shall we say, pretty heavy into drugs. Not that you wouldn’t have guessed watching the film. It’s not especially funny (actually it’s not funny at all).

The DVD trailers tacitly acknowledge that Gold is a difficult film to classify: it’s variously described as a western, a nudie, a musical, etc. It’s all of these and none of these. If anything, Gold loosely follows a form that Close and partner Charna Halpern developed, known in the improv field as the “Harold”. According to this story approach, disjointed situations all converge at the end. In Gold, this happens, but not in a particularly meaningful or satisfactory way.

The approach to this movie seems to have been thus: let’s arrive at this place out in the woods and see what kind of props we find. Oh, look: a bulldozer. We can use that. Over there’s some barbed wire. Cool; that’ll work for something.

Step two was to take some drugs. Step two was likely repeated several times before proceeding to step three, removal of clothing. Step four involved “blocking” some basic scenes, something along the lines of, “he comes up, and then, um, you talk to him about some stuff.” Step five was comprised of firing up the cameras and filming the improvised scene. There was no step six (i.e. “re-shoot until it makes sense.”)

Nearly every scene has a first-take feel to it. Sometimes the camera operators realize they haven’t focused, so they do so halfway through the scene. No matter, man: that’ll look groovy. Every two or three minutes the “story” scenes cut away to another scene, usually one with naked girls rubbing mud on each others’ breasts. Lots of giggling, slapping, tickling and playful running away ensues.

Gold is harmless enough. It’s as good as any example of the result of a bunch of merry pranksters (as opposed to Merry Pranksters) heading off to the country with a bunch of drugs and some cameras and unexposed film. Don’t hurt yourself trying to make sense of the plot, such as it is. Enjoy the period costumes, especially the Charlatans-like Wild West garb the hippies wear before they all disrobe and jump in the pond for the first of a dozen swims. Don’t try to understand why there’s a mod starlet type chic, or why she is having sex with the “mayor” minutes after these strangers on a train meet. And certainly, don’t try to comprehend why a murder takes place. It’s all just…groovy.

Gold isn’t a film you’ll likely want to watch again and again, but as an example of the curious convergence of the naïve and the decadent, it’s worth a furtive look.