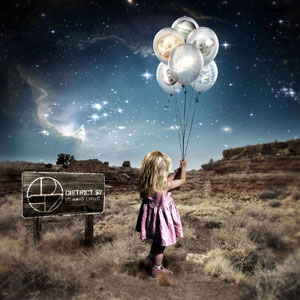 Prog is usually thought of as a man’s game, and not without strong evidence to support such a viewpoint. I remember attending a club gig by the amazing Frank Zappa tribute act Project Object; the audience was a veritable sausagefest, and the one woman in attendance didn’t “get” it: she spread a blanket on the floor a mere feet from the stage, sat down cross-legged and began to knit a sweater or something while we middle-aged white semi-hipsters stood, heads nodding to the 7/4 madness.

Except for the knitting part, most prog fans can attest: that’s how it goes. Guys like prog, and women rarely do. (The ever-quotable DW Dunphy recently wrote, “if you find a woman who likes prog, put a ring on it.” Not sure I’d agree, but you get the point.) And female performers of progressive rock, well, they’re a rarer breed still.

There are exceptions, and they’re pretty amazing musicians and performers, regardless of gender. Bassist Julie Slick is one; I reviewed her debut album not long ago.

Another one is Leslie Hunt. And talk about left-field: she’s a former finalist on season six of American Idol, a show that represents musical values far removed from prog and closer to, say, Hee Haw. She was one of the “top 24” (actually sixteenth) in a season that included that vaguely creepy no-talent Sanjaya kid, and the excellent but ultimately non-winning Melinda Doolittle. (Yes, I actually watched part of that season. My reasoning seemed sound at the time.)

Hunt’s new band is called District 97, and the album Hybrid Child (Lasers Edge) is a curious, heady mix of styles. The disc kicks off full-throttle with “Don’t Wanna Wait Another Day,” a song best labeled as prog-blues. Talk about hybrids! If I told you District 97 has a sonic attack midway between Larks Tongues in Aspic King Crimson and Leftoverture-era Kansas, you might reply, “Oh, so they have a violinist.” And you’d be almost correct. Katinka “Tinky” Kleijn of the Chicago Synphony Orchestra rocks the cello like Eddie Jobson plays the violin.

“I Can’t Take You With Me” features fiery organ-synth lines that will bring smiles to Keith Emerson fans, but there’s as much melodicism as there is technique in the work of keyboardist Rob Clearfield. When he and Kleijn lock in for a “dual solo” it’s like a modern take on Fragile-era Yes.

Most of the album is comprised of a multi-song suite called “Mindscan,” but following along in your playbook isn’t necessary for enjoyment. “Mindscan V: Imagination” features some subtle soundscapes, adding texture to an album that’s not all about rocking. When it comes right down to it, progressive rock, with its emphasis on acrobatics, is perhaps one of the few genres in which Hunt’s impressive talents can be properly showcased. Her gentle, assured work on the sparely-arranged sorta-title-track “Mindscan VI: Hybrid Child” is a highlight. Clearfield’s Rick Wakeman-meets-gospel keys on the song give it an anthemic feel.

Jim Tashjian‘s guitar work is head-spinning, especially on tracks like “Mindscan IX: When I Awake.” The rhythm section is fierce and precise all at once: the technical precision is there, as is the power. Several times throughout Hybrid Child, the sound threatens to veer toward prog-metal, with its stop-start rhythms and hairpin musical turns. But the sound never completely slides over into that style. Prior to Hunt’s joining, the band was an instrumental effort, and that background shows in the arrangements: the melodic lines are busy enough that a vocalist isn’t necessarily needed. And indeed there are long instrumental passages throughout the disc. But it seems that as Hunt was integrated into the band, a welcome rethinking occurred. The arrangements don’t feature her vocals laid atop instro tunes; instead the vocals belong where they are. So what could have been a disaster is instead a success.

Throughout the disc, Leslie Hunt’s vocals are overdubbed for harmonies, and the result is pleasing; her vocal control is stunning — listen to the album opener for proof — and the precise attention to harmonies is in keeping with the detailed-oriented prog aesthetic.

Y’know the old joke. Q: What do you call a guy who hangs around with musicians? A: a drummer. Well, this drummer, Jonathan Schang, is responsible for composing all of the songs on Hybrid Child (two are co-compositions). So there.

A look through the liner notes may elicit a mild chuckle. The center spread features a picture of the band, all serious looking like you’d expect (prog bands never smile, unless they’re Mangrove). But what we have here are four youngish, slightly nerdy bespectacled guys, and two, well, um, kinda hot chicks. All happen to be damn impressive musicians, but, well, it’s just a little amusing. You go, guys. (As do you, ladies.) More from District 97, please. And howsabout some live dates outside Chicagoland?

Verdict: a very impressive debut that sounds more like the work of seasoned veterans, but with the fire of players who are still reaching for success. A band to watch.