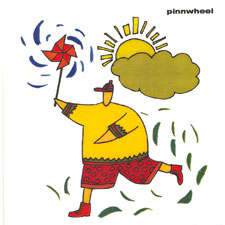 This endearing collection is of interest primarily to Fountains of Wayne fans, but in a perfect world that would include damn near everybody. Recorded (as best as anyone can determine) in the late 1980s to early 1990s, this set of thirteen songs captures the duo of Chris Collingwood and Adam Schlesinger in their first, abortive attempt to put together the band that would become (in 1996) Fountains of Wayne.

Four of the songs found here would subsequently be re-recorded by FoW in superior versions, but there’s a homespun charm to these demos that makes them a charming listen. “Troubled Times” was released on 1999’s Utopia Parkway. The breezy “I Know You Well” was a Japan-only bonus track on that album, and was included on the 2005 Out-of-State Plates compilation. “Imperia” and “Half a Woman” also ended up on that odds and sods collection.

On the Pinnwheel [sic] demos, the 1991 track “Half a Woman” starts off with a chuckle and then a spoken question: “Do you want to…um, let’s trade instruments.” It goes on to tell the story of the magician Great Scott and his lovely assistant. The track “Cry One Tear” was later recorded by Collingwood’s alt-country side project The Gay Potatoes; that version is more loose-limbed than the relatively polished studio version here.

That leaves eight songs that have never seen official release. While none is an earth-shaking, lost powerpop nugget along the lines of “Red Dragon Tattoo” or “Stacy’s Mom,” they’re all worthwhile.

Listening to this collection, one thing is clear: Collingwood and Schlesinger’s concept was firmly in place long before the band ever got off the ground. The group’s combination of melodicism, wistfulness and tongue-in-cheek humor shines through on all the tracks, including the collection’s surest contender for breakout status, the jangly “Slave to Your Misery.” It’s also the track that sounds the most like the band circa 2008 and beyond.

A forum posting at fountainsofwayne.us included this amusing mini-anecdote from “Random Guy,” a fan in possession of the Pinnwheel demos: “I asked Chris [Collingwood] to sign it; he didn’t mind at all. He was surprised, said he didn’t have it.” If this is true, it’s unfortunate: a downloadable version of these demos–assuming the rights don’t belong to some evil record company somewhere–could be a steady seller if put up for sale on the group’s official site.

The demos have circulated for years among traders, going back to the cassette-trading days; this may account in part for the hissy, lo-fi nature of these home/studio demos. In 2006 an enterprising fan “remastered” five of the tracks. Presumably he or she was working from a lower-generation “master” than the version used to create the CD copy I reviewed. In any event, the results are far superior sonically; they’re much clearer and brighter, even if they circulate in lossy MP3 versions.

After the Pinnwheel demos failed to get them a deal, Schlesinger and Collingwood went their separate ways. Adam formed indie chanson-pop group Ivy with Dominique Durand and Andy Chase (that on-again/off-again project released its most recent disc in 2005; rumors abound of another in the works). Schlesinger also wrote (but did not sing or play on) the Oscar®-nominated title track to the film That Thing You Do! Fountains of Wayne finally landed a deal and released their official debut in 1996. That self-titled release did not draw on any of the Pinnwheel-era material.

With access to a mere four albums (five if, as you should, you count the Out-of-State Plates comp) to their credit between 1996 and 2010, fans of Fountains of Wayne would do well to seek out this collection, and perhaps lobby the band for an official release.