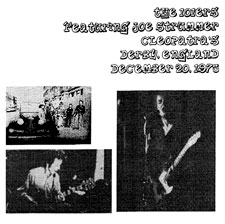 “No Beatles or Rolling Stones in 1977!” Yeah, right. That famously provocative quote has been attributed to The Clash. And while it’s true that mid-70s punk in its various forms was to a large extent something new, there’s a strong argument to be made that The Clash and the Sex Pistols were actually quite traditionally-minded. One look at a Sex Pistols live set list shows covers of The Monkees “(I’m Not Your) Stepping Stone” and The Stooges‘ (now there’s some punks) “No Fun.”

In some ways, the Pistols were more honest about it; they played the Monkees tune without a hint of irony: a good song is a good song. But then there’s The Clash, and that iconoclastic quote. But wait: guitarist Joe Strummer was, right up to joining The Clash, playing in a pub rock group called The 101ers. While that group never released an album during their time together, a clutch of studio tracks were collected (released as Elgin Avenue Breakdown) to capitalize on the subsequent fame Strummer found in The Clash.

What’s more — and relevant to our argument here — there exists a fair-quality recording of a 101ers show from the tail-end of their time together. And here’s the funny part: one, they sound an awful lot like The Clash (Strummer played and sang). Two, they also sound a lot like Star Club-era Beatles. In fact this recording sounds like nothing so much as the semi-legit Beatles release Live! at the Star Club 1962. Three–and this is where the argument takes firm hold–the set list shows that Strummer and Co. were in fact rabid classicists. There wasn’t anything especially cool in December 1975 about covering “Route 66,” “Who Do You Love” “Too Much Monkey Business,” “Willie and the Hand Jive,” Elvis‘ “Heartbreak Hotel” and Chuck Berry‘s “Johnny B. Goode.”

And if any doubt remains, one listen to the set-opener will end any disagreement. In 1975 the only way to buy a copy of The Beatles’ screaming Little Richard-like raver “I’m Down” was to purchase a 45rpm of the “Help!” single and flip it over to the b-side. Though a great song, “I’m Down” was about as close to an obscurity as one could find in the Beatles’ catalog. But Strummer knew it, and knew it well.

Don’t get me wrong: this is actually a terrific set; both it and the legit 101ers album are well worth seeking out. But as Strummer’s work after The Clash showed (especially The Mescaleros), the rallying cry of “No Beatles or Rolling Stones in 1977” was little more than a marketing ploy. Methinks they doth protested too much.