Though I did my best not to, as the July 2010 Paul McCartney concert in Charlotte kicked off, I already had in my head a couple of ideas I thought I’d use in my post-show summary. But besides putting on a great show, McCartney managed to be something I hadn’t expected: just slightly unpredictable. 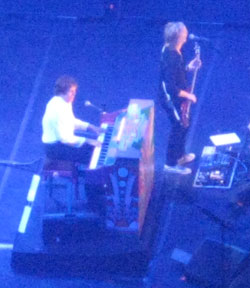 Sure, I had a pretty good idea of what songs to expect, and in what order. And I knew that we’d be treated to an evening’s full of by-the-book McCartneyisms: the well-rehearsed off-the-cuff anecdotes, the homespun snippet of some ditty of supposed relevance to the town he’s playing in, the everybody-say-woo bit, the connecting with a specific audience member (in this case a guy woman waving a “MCCARTNY” [sic] auto license tag), and repeated observations of what a great time we’re all having.

Buying a ticket to a Paul McCartney concert is not about witnessing spontaneity. But it is about a bunch of other things, all good. The man is in his late sixties now, and remains one of the planet’s richest performers. In 2010 Paul McCartney hasn’t got anything to prove to the audience. He could get up there and phone it in, and plenty of people would be satisfied, and would likely queue up for tickets to the next tour.

More than most performers, McCartney has always been one who truly wants to make his fans happy. You hear plenty of songwriters say things like “I write songs to please myself” and such, and thank goodness they do, because that’s what makes it real. And there’s ample evidence to suggest that the same is true of Macca. But onstage it’s a different matter altogether. He’s there to put on a show. He knows it, we know it.

Even to someone who has grown up with the Beatles, Wings and solo McCartney catalog (including tangential projects like The Fireman, the Liverpool Oratorio and Standing Stone, and even the Percy “Thrills” Thrillington album), a McCartney concert can still provide some mild surprises.

One surprise was how much Paul relinquished bass playing duties to Brian Ray. When McCartney did play bass, he used his trademark Hofner, but for a good half of the show, Ray played a Gibson SG bass while McCartney displayed (with some subtlety) what an accomplished musician he actually is. And that’s not an insignificant point: while his skills as a composer, singer and performer in general are well established, all-around-crack-musician isn’t always the first phrase that comes to mind when thinking of McCartney. Of course that’s wrong: this is a man who played all of the instruments on his first solo album, and did so before it was practical or relatively common (see: Todd Rundgren, Mike Oldfield, Stevie Wonder, etc.) But on this tour Paul plays lead guitar, acoustic guitar, mandolin, ukulele and piano.

The pacing of the show was flawless. With a catalog as vast as his, McCartney has material that covers a wide range of styles and emotions. Putting together a set list is a high-wire act, especially for someone so focused on crowd-pleasing. There are the demands of the casual fans: they want to hear the mega-hits, and they want them played Just Like the Record. For those people, McCartney served up ditties like “Let ‘Em In” and the mini-suite “Band on the Run.” Some punters are hardcore: they want to witness Paul reach deep into his songbook and pull out some deep album cuts. For them (well, us, really) McCartney and band pulled out “Mrs Vandebilt,” “Letting Go” and the Beatles’ “I’ve Got a Feeling.” And to keep things a bit contemporary, the band cranked out the two most accessible tracks from the Fireman project.

One of my original premises, one of the things I was expecting to comment on at some length, was the critical role that keyboardist Paul “Wix” Wickens occupies in the band. Wix has been part of McCartney’s touring lineup for twenty years: it’s perhaps worth pointing out that his time with McCartney has vastly outlasted such musical collaborations as those with John Lennon (spanning 1957-1969) or Denny Laine (1971-1980). Only Paul’s wife Linda, who succumbed to cancer, could claim a longer musical association with Paul. 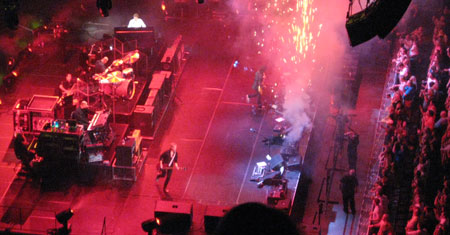 And beginning with McCartney’s 1989-90 world tour (the first time I saw him onstage, as it happens), Wickens was indeed a central component of the sound that came from the stage. By the late-late 1980s, keyboard technology had finally advanced to the point where it was possible to recreate the complex and distinctive sounds of the Beatles’ Baroque and Mannerist period works (Sgt. Pepper, Magical Mystery Tour, Abbey Road) in an authentic fashion. So it was left — in those days — to Wix to play the horn charts from “Magical Mystery Tour,” the orchestra in “A Day in the Life,” and so on. Fans delighted to these carefully faithful live renditions of Beatles and Wings hits of yore.

Wickens — the band’s onstage musical director — remains in that role. But in 2010 his delivery is much more subtle. The current band (him and McCartney plus guitarists Rusty Anderson and Brian Ray, and drummer Abe Laboriel Jr. — a stable lineup going on nine years now) is focused less on providing audio carbon copies of classic songs. They’re careful not to mess with the arrangements too much —  don’t nobody better mess with our Beatles — but on the 2010 tour, the audience is as likely as not to hear what used to be a horn chart part played instead by Rusty Anderson on slide guitar. Not only does this work, but this approach gives the band a more rock-oriented edge. It also provides a less “plastic” feeling, and I say this as a keyboard player myself. 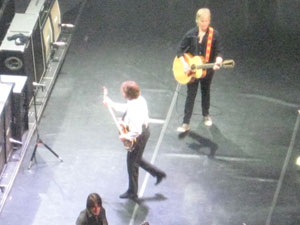 This go-round there were no tunes from Magical Mystery Tour, only two from Sgt. Pepper, and only one from Abbey Road (unless you count a George Harrison song). Also notably absent were any of the early Beatles rockers. But overall the set was well balanced, with perhaps a bit more Wings material (about ten songs) than casual fans might have expected.

The nearly three-hour setlist was carefully sequenced. The segues were smooth. Thoughtful pieces — like an amazing “Eleanor Rigby” featuring Paul on acoustic guitar, Wix on virtual (and note-perfect) string octet plus Anderson and Laboriel on vocal harmonies — led seamlessly into other styles. Particularly effective was the ukulele-led George Harrison tribute of “Something.” It led into a powerful like-the-Beatles version for its second half, effectively bridging a mini-set of mellower numbers back into rock and roll without jarring the audience.

Hardcore fans will always find something to carp about, and in this reviewer’s case it was the lack of getting to hear “Two of Us.” But instead we got to hear “I’ve Just Seen a Face.” Nice, but McCartney did that one on the Wings Over America tour, and he’d never done “Two of Us” until this tour. But at three hours, nobody could realistically claim that McCartney didn’t offer value for money.

Like Paul sings in “Venus and Mars / Rock Show,” the experience of seeing him onstage in 2010 is “like a relic from a different age.” But it’s a welcome and unforgettable experience. Few performers have earned the stature of Paul McCartney, and fewer still consistently deliver onstage. Over the course of thirty-seven numbers, his energy didn’t visibly flag once, and he never lost the audience, not for as much as a second. You could learn a lot about performing by studying a McCartney concert. But it’s also fun to just go and enjoy the evening. I did both.