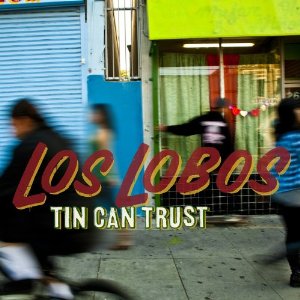 Chances are, if you only know one thing about Los Lobos, it’s that they’re a band of Mexican American heritage. If that’s all you know, 2010 is a great time to correct that situation. The band’s latest album Tin Can Trust is a consistently engaging listen. The record — their 14th studio effort — has less of a Latino vibe than you may have been led to believe or expect. While there are some hints here and there of the musicians’ ethnicity, in general Los Lobos manages to create a record that in many ways helps expand and redefine what exactly “Americana” is.

That said, Tin Can Trust is not for the most part folky, acoustic-based music. It’s a rock record with plenty of variety. Take a song like the opener “Burn it Down.” For the first four minutes it’s a straightforward heartland rocker not miles away from the style of John Mellencamp or some of Springsteen‘s less overwrought material. But then the guitar solo kicks in and it’s a full-throttle rocker. Harmony vocals from Susan Tedeschi add an unexpected and pleasing dimension.

That’s just the sort of texture you’ll find throughout the eleven tracks on Tin Can Trust. “On Main Street” actually swings, and evokes mental pictures of a scenic ride through Los Angeles neighborhoods, viewed from the inside of a 70s model domestic. Heavily tremoloed guitar and very subtle organ propel the song forward, and a low-mixed lead guitar snakes through most of the song.

The band pays homage to its roots — which, truth be told, are never far from the surface anyway — in “Yo Canto.” The song manages the tricky feat of delivering an authentic Mexican vibe (sing in Español) while still rocking. And it rocks in two ways: rock-and-roll rock, and rock back-n-forth.

The album’s title track is a subtle affair that unfolds slowly. Loosely defined, it’s a blues, but arrangementwise it’s closer in feel to something John Hiatt or late-period Nick Lowe might produce. “Jupiter on the Moon” — a serious contender for best song on the album — has an amazingly intimate feel; in the first thirty seconds a close listen reveals what sounds like a door opening during the recording session. Rather than being a distraction, the little “defect” adds a degree of authenticity to the song. Not that it’s needed: Los Lobos is rarely anything but authentic. Like 60s legends Thee Midniters, the band has an ethnic identity. And while they never run from it or try to downplay it, that identity is merely one part of who they are and what they’re about. Pegging Los Lobos as a Mexican-American band makes as much sense as it would to note that all members of a band are right-handed. They are, great, and it affects how they play, but don’t make too much of it.

Then there’s the matter of “Do the Murray.” The song channels Freddie King‘s blues standard “The Stumble” by way of Peter Green’s Fleetwood Mac. The song rocks out like mad: it swings, it struts, it tears up the place. Its inclusion is almost jarring, as it’s so different from the rest of the album. But it’s such an amazing, tuneful, exciting exercise — not to mention a way of hammering home the stylistic versatility of Los Lobos — that it’s worth any momentary cognitive dissonance the listener might experience.

And the quality never flags. “All My Bridges Burning” is an emotive midtempo number that conjures faint echoes of Dire Straits, with some lovely Hammond work. A soaring lead guitar solo is so tasty, you’ll be frustrated when it ends too soon. Luckily there’s a second solo. Here’s betting that Los Lobos stretches this one out to excellent effect onstage.

In a gutsy move, the band next tackles a cover. Their choice is nothing if not unusual: Los Lobos reaches into the Garcia/Hunter songbook and comes out with late-late-late period song from 1987’s In the Dark. The Grateful Dead‘s “West L.A. Fadeaway” doesn’t rank among that group’s finest works, but in Los Lobos’ capable hands, two amazing and unexpected things happen. One, the song is played straight, not as some excuse to engage in endless, pointless noodlesome jamwankery. That itself would be enough. But the band manages a further feat: they make the song Not Suck. Impressive; they find the melody and the groove in the song.

From its title one can tell that “The Lady and the Rose” is a story-song. But it’s quite a succinct one; Los Lobos’ David Hidalgo and Louie Pérez are adept at working a narrative into the space of a four-minute pop song. That the a melody is vaguely reminiscent of Neil Young‘s “Ohio” may serve as a message to the listener’s subconscious to pay attention to the lyrics. All that said, it’s a love song.

“Mujer Ingrata” is the second Spanish language track on Tin Can Trust, and here Los Lobos plays it straight and traditional. For anyone who remembers and enjoyed their 1988 outing La Pistola y el Corazón, this will be a welcome track. Few bands could successfully maneuver a genre left-turn like this on an album, but Los Lobos’ credibility is such that they can do so.

The album wraps up with “27 Spanishes” a song that is a distant lyrical cousin to Neil Young’s “Cortez the Killer.” But what starts out as a forebodingly serious song develops into something quite humorous in its denouement. And the bluesy thump of the arrangement is a fitting bookend to a near-perfect album. Los Lobos’ Tin Can Trust is a serious contender for this reviewer’s best of 2010.