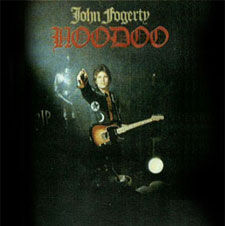 The year was 1976, not a banner year for mainstream rock music. The charts were populated with the likes of England Dan & John Ford Coley, Firefall and The Eagles; soft-centered mid-tempo artists all. A few groups turned out rock albums of merit (Wings, Ted Nugent, The Tubes) but other than Boston and Frampton Comes Alive, MOR and disco ruled the charts.

The sort of rootsy-straight-ahead brand of rock produced by late 60s groups like Creedence Clearwater Revival had fallen out of favor in the marketplace. And punk–despite its eventual influence–wasn’t shifting units at all. So it was against this backdrop that former CCR leader John Fogerty began work on his third solo album, Hoodoo. The first two had met with little success: Blue Ridge Rangers is something of a cult favorite, and 1975’s John Fogerty fared only slightly better.

For reasons that have never been clear, Fogerty chose to put together an album that fused his CCR style (he did write, arrange and produce most all of CCR’s material, after all) with that of the prevailing style: disco. If that reads in print like a terrible idea, it was.

Even at the time, according to Hank Bordowitz‘s Bad Moon Rising: The Unauthorized History of Creedence Clearwater Revival, the honchos at Elektra sensed it was a dog, and ultimately refused to release it.

According to most accounts, Fogerty was experiencing a writer’s block, due in part to the financial hassles related to CCR’s breakup. This uneven collection of songs was, it seems, all he could come up with. In fact he continued to fiddle with the tapes for years, with an eye toward eventual release. Luckily for him, the block subsided and he returned with the classic Centerfield, but that wasn’t until 1985: nine years later.

Fogerty has always been very guarded about his master tapes, hence the existence of few CCR or solo studio bootlegs. Poor-to-fair copies of Hoodoo have escaped the vaults; it’s likely that these are copies of an early cassette master.

The album is not without its charms, though its sound is hopelessly pinned to 1976. There are flashes of Fogerty’s songwriting prowess on tracks like “You Got the Magic” (which was released as a single) and “Between the Lines,” but most tracks are marred by wrongheaded production flourishes. “Hoodoo Man” is another strong number, and would in fact have been worthy of revival, so to speak. But nothing explains inclusion of the instrumental “Marching to Blarney,” which serves only to pad this short album…and to annoy.

That track notwithstanding, there isn’t much here that couldn’t have been fixed by removing the dated trappings (talk box, fuzz bass, sax solo). And for Fogerty fans, it’s worth hearing as an interesting failure, and a partial answer to the question “what was Fogerty up to between 1975 and 1985?” This odd album is worth seeking out, as it will likely never see legitimate release. Ignore the clumsy keyboard bass parts, the cheesy synth strings and wah-wah and try to listen to the tunes. Then dig out Centerfield.

Difficulty to Locate: 8 out of 10
General Listenability: 6 out of 10