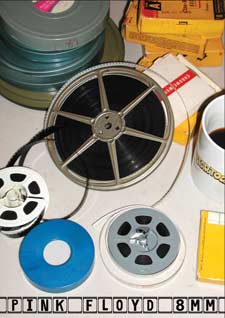 When it comes to Pink Floyd, a bounty of unreleased audio is in circulation. Audience recordings–albeit poor ones–exist even of the Syd Barrett-led group; these date back to 1967. Over 400 shows circulate in lossless audio, and that doesn’t even include solo tours by David Gilmour and Roger Waters. And that doesn’t even address the wealth of unofficial Pink Floyd video material. Films of the group in its 1970s heyday continue to surface, even now.

Which brings us to 8MM, a lovingly-compiled collection of audience films of the group. Put together by the (for good reason) pseudonymous RonToon and “released” under the Harvested imprint, 8MM is the fruit of a painstaking restoration effort. RonToon says, “8MM took me two years to finish, working in my spare time, and frequently getting frustrated and stuck. I replaced all the audio from the original footage that had live sound and synched up the correct audio to the rest.” Most of the films were discovered some twenty years ago, but only in recent years has technology brought the means for this sort of restoration project within the reach of the (obviously talented) enthusiast.

The disc contains highlights of six shows; all but one date from the ’77 Animals tour. The 1972 show was part of the Dark Side of the Moon tour. Inexplicably, save Pink Floyd at Pompeii, no live footage of the classic lineup has ever been released officially.

8MM films were the 1960s and -70s precursor to home video. Exposed film was sent out for processing, and then played back on your Dad’s clickety-clack projector in your darkened living room. Little to nothing is known about the original filmers of these snippets, other than that they–and RonToon, and the folks at Harvested–have bestowed a gift upon us with the release of 8MM. This DVD is one for the ages.

Difficulty to Locate: 3 out of 10
General Listenability/watchability: 7 out of 10