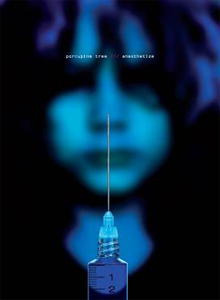 From the opening menu of Porcupine Tree‘s latest concert DVD, 2010’s Anesthetize, it’s clear that the band is striking a decidedly different tone this go-round. It’s been four years since the band released Arriving Somewhere…, the live document of their 2005 tour.

Back then, the band was promoting their then-current release Deadwing. Since that time they’ve released a succession of high-quality albums — 2007’s Fear of a Blank Planet, 2008’s Nil Recurring, and in 2010 The Incident. (And that doesn’t even include the 2008 reissue of the 2000 album Lightbulb Sun. And don’t even get me started on Steven Wilson‘s other projects, including Blackfield, No-man and a solo album.) Each Porcupine Tree album has seen the group moving more in a progressive metal direction, yet retaining the strong sense of melodicism and texture that has been a hallmark of Steven Wilson’s work from the beginning.

Anesthetize is a visual document of a date on the Fear of a Blank Planet tour. And while those shows generally made ample use of evocative lighting and thematically-related films at the back of the stage, Anesthetize feels visually dialed down from the look and feel of the Deadwing tour. Here, the focus is squarely on the performance and the music.

The songs on Fear of a Blank Planet and Nil Recurring (the latter technically an EP, but a longish one) are more than thematically linked; musical motifs crop up again and again. But don’t think of The Wall here; Wilson’s use of recurring melodies is far more sophisticated (and pleasing to the ear) than what Roger Waters did in 1979. In any event, it made sense in concert to perform material from both records, even though on early tour dates (such as when this reviewer first saw the group and interviewed Wilson), Nil Recurring was days away from release, so audiences were unfamiliar with the songs.

While Arriving Somewhere… included bonus material that found the band reaching back to material from the days when it was just Wilson (“Radioactive Toy”), on Anesthetize the focus is more on current material. Though the band does reach back to “Dark Matter” from 1996’s Signify, so fans of the older, less metallic stuff are rewarded for sticking around.

The camerawork and editing are flawless, as is the sound. Fans of the group would expect nothing less, and Wilson’s commitment to providing value for money is a long-established one. Steven Wilson is quite delightfully old-school in his insistence upon care and effort going into every phase of production, from the performance to the physical product. And Anesthetize fits right in with that philosophy.