Album Review: Various – Through a Faraway Window – A Tribute to Jimmy Silva 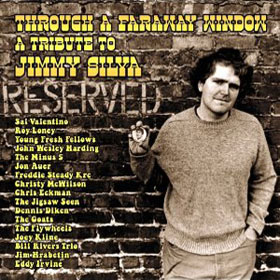 Tribute albums are a curious beast, the sort of enterprise that can conjure up the cynical suspicion of reviewers. Oftentimes tribute compilations are populated by hipsters or au courant acts, and the subject of said tribute is an artist who’s back on the radar screen for one or another reason. In short, more often than not tribute discs are cash-in projects that fail to offer much in the way of interest, relevance or — most critical of all — musical enjoyment.

There does exist the odd exception. And I’m happy to report that Through a Faraway Window: A Tribute to Jimmy Silva is such an exception. Now, chances are — unless you’re a hardcore aficionado of Northwest powerpop acts — Silva’s name is unfamiliar to you. If you’re a liner notes reader with excellent taste and a photographic memory, you might recall Silva’s name as composer of the song “Hand of Glory,” covered by The Smithereens on their 1986 LP Especially for You.

But as it turns out, Jimmy Silva had more going for him than merely placing a song on a ‘Reens album. And most of the artists that appear on Through a Faraway Window have a connection to Silva; they’re fans, but not merely fans of his work. Jimmy Silva played and recorded back in the 70s and 80s with — variously — Scott McCaughey (Young Fresh Fellows), Dennis Diken (Smithereens) and Sal Valentino (Beau Brummels). These artists and many others all contribute to this album, and it’s a labor of love. The excellent liner notes by DJ Jud Cost give a good overview of Silva’s life and career, and help put him and his work in a context that will introduce him well to fans of the other (more well-known) artists on the album. Cost is adept and successful at painting a word picture of Silva as a talented, gentle soul who was ill at ease onstage.

The acts on Through a Faraway Window cover Silva’s music — he released several albums himself and as such had a fairly deep catalog — in their own inimitable styles, yet there’s a sonic thread running throughout the album’s nearly thirty tracks. Cost nails it when he writes, “[Silva] sounds like a red-blooded (or melancholy) combination of the Byrds, the Beau Brummels and R.E.M. with, of course, enough of something uniquely his own to make it all work. That spells folk-rock in my book.”

And indeed it does. “I’ve Got Time” by the Flywheels (featuring Silva’s friend and former bandmate Kim Wonderley) strikes a vibe halfway between the Bangles and Brummels. John Wesley Harding‘s emotive reading of “Need I Know” sounds like a slightly less baroque Left Banke. And on it goes: each artist manages the challenging feat of interpreting Silva’s song in their own way, remaining true to the original musical idea while maintaining their own musical personality in the process.

A few off-the-cuff audio vérité snippets of Silva himself are included, and while they’re amusing and homespun, they don’t show Silva to great effect. But that’s not their point.

The album certainly rocks hard in places. Roy Loney (Phantom Movers, Flamin Groovies) tears it up on Silva’s “Big House,” a song that shows that Silva was — like most of his friends — a fiendish Kinks fan. (The song is a close sonic relative of the Kinks’ “Hard Way” from their 1975 LP The Kinks Present Schoolboys in Disgrace.) But that rocking is starkly contrasted by the clip-clop country stylings of Christy McWilson‘s “Man of the Cloth.” And Chris Eckman‘s “Doesn’t Matter at All” sounds a lot like moody, atmospheric Kerosene Man-era Steve Wynn. Freddie Steady Krc‘s “Tin Whistle and a Wooden Drum” nails the 90s jangle-powerpop revival aesthetic to lovely effect. The point of mentioning these tracks is to get across the idea that Silva’s writing talents covered a lot of territory. And from the quotes in the liner notes and the care that went into the tribute tracks, it’s clear he was loved and is missed.

Silva contracted chicken pox — thought of as a childhood malady but often fatal to adults — and died in 1994. Through a Faraway Window is a fitting tribute, one that may well send listeners searching for his original material, found on four albums released between the mid 80s and shortly after his untimely passing at age 42.