Note: Next week I’ll publish my extensive three-part interview with Jason Falkner. The multi-instrumentalist is a former member of the Three O’Clock, Jellyfish and the Grays, and has recorded with artists including Air, Dennis Diken, Beck, Charlotte Gainsbourg and many others. As a teaser/preview of that piece, here’s a review of a bootleg um, unauthorized collectors-only collection from awhile back. 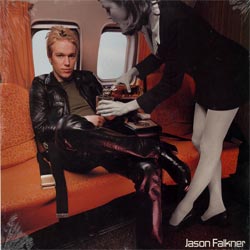 Powerpop wunderkind Jason Falkner, fresh from stints with Jellyfish and The Grays, recorded his peerless sophomore solo disc Can You Still Feel in 1997 with Nigel Godrich (producer for Radiohead, and Paul McCartney‘s Chaos and Creation in the Backyard) behind the boards. The album was polished to a sonic sheen that presented Falkner’s carefully-crafted pop meisterworks to their best advantage. With that in mind, why would one wish to hear the demos for those sessions?

The answer lies in the fact that these particular demos represent something of an alternate realization of the finished product. Quite accomplished on a wide array of instruments, and no slouch at the recording console himself, Falkner’s demos for Can You Still Feel reveal different — yet not at all unfinished — arrangements for a number of the songs. The difference is most apparent on “The Invitation.” In its place as the legit album’s leadoff track, “The Invitation” is a brief intro styled after the first thirty seconds of The Beatles‘ “Honey Pie.” But on the demo disc, it’s a full-length pop song in a more traditional arrangement. Contrasts between the demos and the released album continue throughout the disc. Even the track sequencing makes for a different, well, “feel.”

A handful of these demo tracks may have subsequently appeared on either of Falkner’s two legitimate demo collections, but there’s still plenty here for the committed fan (or the willing-to-be-converted).