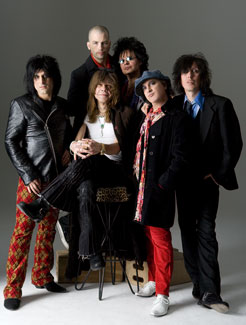 “I have this saying,” David Johansen says, as he readies for an extensive concert tour of South America. “Everything starts out as heresy, and winds up as superstition.” When his group–The New York Dolls–released their self-titled debut album in 1973, their in-your-face brand of rock ‘n roll was coupled with a lipstick-and-drag approach that all but dared you to ignore them. David recalls, “When we came out–not that we planned it that way–it was perceived as kind of a new, out-on-the-ledge kind of thing. I think what that did was, for people who…” he grimaces and chuckles, “liked Journey or something, it was like, ‘oh man; I don’t want to deal with this,’ y’know?”

The Dolls’ music remained rooted in rock ‘n’ roll traditions. “It’s funny,” Johansen observes, “because I know when we began, people would say, ‘why do you play like that?’ We would look at them like, ‘this is the way we play! We don’t know how to play any other way!’ It wasn’t like we created some sort of sound on purpose or something. We had this very strong ethic about how rock and roll should be. People would ask us, ‘what kind of music is this?’ And we were like [laughs], ‘it’s rock ‘n roll music; whaddya think it is?'” Johansen points out that the Dolls drew upon the sound and approach of (among others) “Little Richard, and the girl groups, and the soul bands, and…put it all together.”

I mention to David that the lead guitar licks on their May 2008 release Live at the Fillmore East cop phrases from the Beatles…and The James Gang. “I wouldn’t be surprised,” Johansen replies. “We’ve always had little quotes of things in our songs. In ‘Trash’ (from 1973), it’s got that ‘Love is Strange’ thing. It’s part of what we do. It’s the language; we’re just using the language.

Some groups, as the saying goes, sold few records, but everybody who bought one went out and formed a band and became famous. The Velvet Underground, The Stooges, Big Star, The New York Dolls: none enjoyed a high profile during their career; all are now revered for their prescient approach and for influence on other important acts. “I think what happened was that a lot of kids who were thinkin’ about makin’ bands and stuff really got into it,” David says. “Because it was really vital rock and roll music. It wasn’t like that plastic shit that they were sellin’ on the radio. A lot of them got inspired by it. And they went on to make bands, and eventually it became the way to play rock ‘n roll music.”

In the wake of commercial indifference, intra-band arguments and drug abuse, the group broke up in 1975. Three members of the 70s lineup had died (original drummer Billy Murcia in the 70s, legendary guitarist Johnny Thunders and drummer Jerry Nolan both in the 90s). Goaded by superfan Morrissey, Johansen re-formed the group in 2004 with founding guitarist Sylvain Sylvain, and tracked down bassist Arthur “Killer” Kane. (The latter-day saga is covered well–and poignantly–in Greg Whiteley‘s must-see 2005 film New York Doll.)

They augmented the group with other ace players of note, including Sami Yaffa of Hanoi Rocks. “When we started this phase of the band,” David explains, “we were just gonna do [the one] show. If at that point somebody had proposed, ‘let’s do three hundred shows, and a CD, and let’s go out and do it again next year,’ I would have thought, ‘no way.’ So…we went into this thing, really, on a one-off basis, then we took a few more shows, and some festivals. Because we figured, ‘well, we’re up and running anyway. It’s fun; let’s do this for awhile.’ It wasn’t until like a year later that we realized, ‘you know, we’re a band. This is what we do.'”

Even now, what they do isn’t vying for the charts. David observes how the mainstream seems to operate: “Somebody gets a hit with something, and then a hundred other bands go, ‘oh, well, if we do that, maybe we’ll get a hit.’ So then they’re all kind of trying to create something that isn’t really coming from them. And I always figure, well, if I ever felt like I was doing that, I might as well get a job, y’know? Because to me, that’s not playing, that’s working.”