The Steve Hackett Interview, Part One

Guitarist Steve Hackett has charted a long and successful career as an innovative musician. He rose to fame as the guitarist in Genesis during that group’s most creatively fertile period. Joining in 1970 at the tender age of 20, Hackett remained with the band through 1977, at which time the group’s progressive period effectively ended. Hackett went on to record a long string of solo albums, and these releases found him pushing the limits of his chosen style into world music, near-classical, and more. In the mid 1980s he took a swing at the commercial end of the musical spectrum with the supergroup GTR — also featuring Yes‘ Steve Howe on guitar — but after that Hackett put his attention back toward solo-billed pursuits. 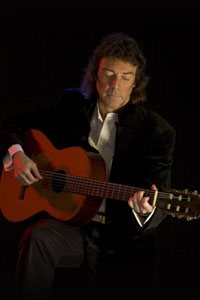 Hackett’s latest release is Out of the Tunnel’s Mouth, a collection of songs that are true to all of his best qualities: progressive arrangements, powerful playing and healthy drawing from disparate world music styles. On the eve of the album’s release, I spoke at length with Steve about the new album, though eventually — in light of the recent Rock and Roll Hall of Fame induction — our conversation turned to Genesis as well.

The single most remarkable thing about Out of the Tunnel’s Mouth is how deftly Hackett moves between styles and genres. The song “Nomads,” for example, starts out as an acoustic ballad with a strong melody, then it gallops into a Spanish flamenco guitar with what a Gypsy ambience. Then it explodes into a wide-screen rock solo. All of this takes place in a mere 4½ minutes. What’s more, that approach of variety persists throughout the album: every song goes some place.

“What I tend to like to do,” Hackett explains, “is to mix genres. For instance, on that tune you’ve got the flamenco introduction, then a tune, then use of nylon [string] guitars, then trying to create a picture of a gypsy world. Then, to get to the next level of energy I felt that I needed drums and electric guitars to kick in. Acoustic music — beautiful though it is, and I absolutely adore it — is limited in terms of the amount of energy that you can convey with it. And there’s just something about the electric guitar that has another level of energy and excitement, and so I set up one genre and then I supercede it with another. I think that’s why that particular tune works for me. It’s one of the best, and I think it has some of the best ‘drumscaping’ on it, if you know what I mean. 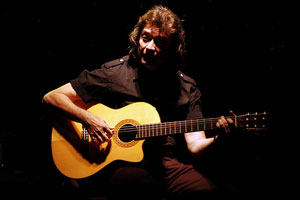 Hackett elaborates on the term. “It’s not a real drummer; it’s two virtual drummers playing at the same time. My musical partner Roger King is very adept at recreating the best of what you’d expect from a drummer. He’s does virtuoso drum performances without actually touching a [drum] skin. He’s done it with compressors and selections of different dynamics.” Modern sonic innovations have come a long way from the brittle, synthesized/sampled drums of just a few years ago. And while Hackett remains fond of real instruments, the choice here was borne largely out of necessity. “I was recording at home and I didn’t have a facility to use a real drummer on this. And so we decided to go this route, to make it containable.

The entirety of Out of the Tunnel’s Mouth was recorded at Steve’s home. The reasons for not using a traditional studio were, he says, “partly economic, and partly a diplomatic solution, because I’d gotten to the point where I felt I could no longer work with my ex-wife and my ex-manager. Let’s put it diplomatically: it was impossible to work autonomously in the studio that we all shared together. So I felt the way to go was to work from home.” But Hackett’s quite at home — so to speak — in the creation of music on his own. “Autonomy in the workplace is sacrosanct for me. The idea of anyone impinging on that territory is something that anyone in any office shouldn’t tolerate.” So his approach for the new album was to “scale down, work at home, work in miniature, work quietly, and use smaller equipment to create big sounds.”

Another benefit of working in one’s home studio is freedom from time constraints: you can work when the muse strikes you. “I think that is the case, Hackett says. “And for me personally I’m less technically adept. I’m probably a technically-challenged person. But where my neurons seem to spark is in the realm of the imagination. I like to work on paper a lot.” 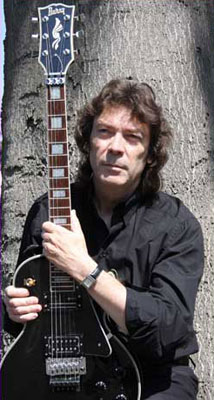 The made-on-Apple aesthetic may have been key to the creation of Out of the Tunnel’s Mouth, but the feel of the album belies its computerized genesis. The track “Emerald and Ash” is the sort one could play for someone as evidence that the disc was created the old-fashioned studio way. Hackett believes that the drums “sound very natural and very roomy.” He notes that the song was informed by “a number of influences: Russian ballet. Beatles, really. And many bands like Led Zeppelin,” who Hackett refers to as “the heaviest band on the block.”

There are also hints — in the screaming guitar and stomping beats — of late period King Crimson. “It’s funny, that, isn’t it?” Hackett muses. “I was very keen on the early King Crimson, but I didn’t have King Crimson in mind at all for that section. Maybe it was the scale that was being used.”

While the album includes guest spots from some musical heavy hitters — Chris Squire, to name one — in many cases, those players recorded their parts digitally and sent them to Steve. “A number of people who worked on the album worked in their own living rooms,” Hackett reveals. “Sometimes we would do things in the studio together, but a number of people had total autonomy, and I was always thrilled with the results of what they sent me.” He notes this approach means that “musicians can send in the part that they’re proud of, as opposed to my idea of what they should be doing.” Still, Hackett is clear about keeping his options open: “I’m not saying in the future I won’t resort to a more traditional method of working face-to-face with people.” 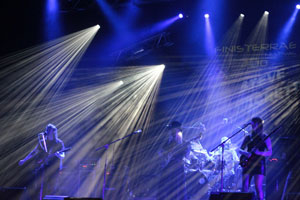 Recording on a computer did present some sonic challenges, Hackett readily admits. “I was very keen that we didn’t try and fool ourselves with volume. Musicians, you know, we all become volume junkies. It sounds great in the studio when we first do it and you say, ‘wow, it sounds powerful.’ And then you listen to it back on a number of different systems and you go ‘mmm…lost something.’ So if you can manage to make it sound like big in miniature, it seems to me that that is the way to go. The hardest thing is to mix bass levels, in order to get a realistic bass level. You have to compromise in order to make a mix portable enough to survive the systems that people will insist on playing it back on. Not everybody has got professional speakers or equipment of a professional standard, of course. That’s a privilege of the few.”

Anthony Phillips — Hackett’s predecessor in the Genesis guitar chair — plays on two of the new album’s tracks. Surprisingly, the two had never worked together before. “I had been trying to get Anthony to work on one of my things for quite some time,” Hackett explains. “He showed up with a 12-string guitar and thought we were just going to do a rehearsal. But cunningly I had an engineer in place! Five minutes later he’d done this beautiful guitar part.” After a number of overdubs, the resulting “Emerald and Ash” had a lot of guitar: “There are two electrics, and two arpeggiating electrics, and two arpeggiating 12-string guitars playing together. And the combination is very much that gorgeous, early Genesis sound.” Hackett characterizes Phillips’ playing as “very courageous. He’s highly underrated; he’s a fabulous 12-string player.”

In Part Two of the Steve Hackett feature, we’ll discuss some of Hackett’s early influences, and we’ll take a closer look at more of the songs on Out of the Tunnel’s Mouth. And in Part Three we’ll discuss instruments, technology, old Genesis albums and that band’s recent induction in to the Rock and Roll Hall of Fame.