DVD Review: We Fun – Atlanta GA Inside Out 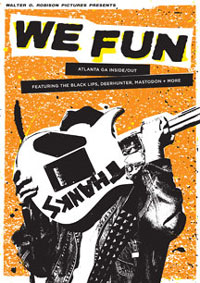 Most of us remember our high school years, right? One of the things we might remember — if we weren’t fortunate — was the class sociopath. You know they guy (and it was pretty much always a guy) who did malevolently mischievous things purely for his amusement, with zero regard for others. He might have set off a smoke bomb at the homecoming dance, or if he was less daring, maybe he just left an unwrapped tuna salad sandwich to rot in his locker. But he took perverse pleasure in the chaos he created.

Ever wonder what happened to that guy? Well, a viewing of the new music documentary We Fun: Atlanta GA Inside Out provides some evidence to suggest that he never grew up. You figured that part, of course, but you might like to know that he’s in a band called the Black Lips.

I kid, if only a little bit. And I’m already quite familiar with the Black Lips. I heard about them several years ago; the buzz about them was that they were a modern garage rock band. With apologies to the late Senator Lloyd Bentsen, I know garage rock. Garage rock is an obsession of mine. Boys, you’re no garage rock band.

Moreover, while their attitude and demeanor aims to emulate the Sex Pistols (or, more aptly, some teenage kids’ idea of what the Sex Pistols were like thirty-three years ago), their music is a pale, washed out approximation. Intentionally not tuning your guitars is not “punk.” Writing songs that lack hooks but pretending like they do is not “punk.” Intentionally destroying club owners’ equipment during your gig is` not “punk.”

Well, okay, maybe that last one is a little punk. But not if it’s done in such a self-conscious manner as is the Black Lips’ approach. I endured an entire show of theirs a couple years back, and came away completely unimpressed. Bratty behavior doesn’t compensate for uninteresting music; just ask Transvision Vamp. But I was prepared to give them a second chance and see how they came off in this film.

Filmmaker Matthew Robison has built an hour-long film around this overrated group of kids. Unwisely — because his effort suffers from comparison — using the far superior 1987 film Athens, GA: Inside/Out as an overt model, Robison attempts to weave a narrative of the current Atlanta music scene. He’s helped in this endeavor by interviews with a number of scenesters.

Describing the Atlanta scene, one of the Black Lips calls it “Athens minus the bullshit.” I don’t know about that: during the film’s runtime I felt as if I was exposed to copious amounts of bullshit. Proud stoner Bradford Cox (Deerhunter) does get it right when he admits that he “was never afraid of being a little bit boring.” Good for him, because if We Fun‘s depiction of him and his band is at all accurate, he is dull, dull, dull.

Some critics argue that in a narrative, the author (or in this case, filmmaker) has a responsibility to depict at least one character as likeable. Or, if not likable, then at least a character should resonate in some way with the viewer; there should be some commonality, some connection. Though it is well-shot, expertly edited and possesses good production values (less so for the concert footage, though), We Fun failed for me on that count.

The characters as portrayed in the film are largely uninteresting, annoying, and — fatally for a film of this type, I think — seemingly uninterested in music in and of itself. With few exceptions, the acts shown onscreen seem to care little if at all about creating interesting, compelling music. Forget about lasting or valuable; these characters seem like they just wanna have some fun, and if someone suggested a means to that end other than music, they’d likely toss their instruments and follow that person to the party.

Nearly everyone in the film manages to be stoned, drunk or both when called upon to provide insights. And in the end, they don’t have much to say. Well, I hear you offering hopefully, maybe the music does the talking. Not so, but nice try. A few worthwhile musical excerpts are included: King Khan and the Shrines, the Selmanaires and a (very) few others. But mostly the viewer is presented with a bunch of kids who don’t seem to put much effort into, well, anything beyond getting a buzz.

Someone is to blame for this. Perhaps it’s the result of clever editing; there is a long list of supposed documentary films that have skewed reality through choices made in the editing suite. (Ondi Timoner‘s Dig — the documentary look at the Brian Jonestown Massacre and Dandy Warhols — is one of the more notorious examples.) But more likely the unflinching honesty of the subjects profiled results in the viewer seeing them just as they are (or wish to be seen). And it’s generally not flattering.

There are a couple of red herrings as well. While the band Mastodon appears in an interview clip, there’s no music footage of them. And just when you think you’ll get to see and hear something by one of the lesser-known (but fairly interesting) acts, you’re instead treated to some more out-of-tune shambolic Black Lips stuff.

We Fun does show some nice shots of local Atlanta clubs, and a car-shot scoping out the always-trendy Little Five Points district is nice enough. But when the film principals open their mouths or attack their instruments, it largely falls flat. The low point of the film (or the high point, if you tend to disagree with most of what I’ve said already) is onstage footage of Jessica Juggs shooting fire out of her…well, you can probably guess. Eww.

If that’s your idea of a good time, go grab some weed and a couple twelves of Pabst Blue Ribbon, and gather up your friends for a DVD viewing of We Fun. Ultimately, the hopeful part of me thinks that these acts have to be better than the film portays them, and the people in them are not as shallow and narcissistic as they seem onscreen. But We Fun doesn’t make me care enough to want to find out, and that is its greatest misdeed.

Tags:black lips, king khan and the shrines, we fun