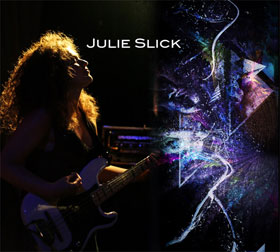 These kids today, I tell ya. No, seriously. I find that I’m really not a fan of many of today’s popular musical movements. The disposable pop stuff is easily enough dismissed, but the whole whiny/screamo thing never moved me either. I appreciate songcraft, musicianship and the creative interplay that exists between players. The ability to create something that is, as the old saw goes, greater than the sum of the parts: that, to me, is a big part of what music is all about.

Bassist Julie Slick clearly understands this. The 24 year old musician has proved her chops in the presence of one of the most musically demanding bandleaders — Adrian Belew — and has now released her self-titled debut, featuring some Very Heavy Friends.

Back to Belew for a moment. Adrian is one of those most unique characters. He’s capable of sonic exploration — this is the guy who made guitars sound like charging rhinoceros way back in the 1980s, after all — and exquisite pop songcraft (the Bears). As a member of King Crimson (and with his parallel solo career, Bears albums and sideman gigs), Belew honed his own chops and moved in several creative directions at once. For some recent power trio gigs, he enlisted the aid of Julie Slick and her brother Eric on drums.

Not to take away even a bit from recognizing Slick’s creative wellspring, but it’s likely that her time with Belew has exerted influence upon her playing, and that influence has been quite positive. Across the fourteen tracks of Julie Slick, the music trades in decidedly progressive styles, but there’s plenty of pop song construction and funk arrangement in evidence as well.

The disc is completely instrumental, save for some found vocal sounds here and there. But the music betrays little need for words. Listeners will find many of the prog mainstays here, both in terms of instrumentation (Chapman stick, for example) and players. Pat Mastelotto (King Crimson et. al.), André Cholmondeley (Project Object) and Julie’s brother Eric show up on several cuts.

There are some keyboards on the album — most notably on “February” — but primarily this is an axefest. Julie Slick plays her Fender bass like a lead instrument; beefy lead lines weave in and out of the arrangements. One moment she’s holding down a thick bottom end while a treated guitar runs in circles; the next, the guitar plays rhythm (after a fashion) while Slick pops out a funk lead.

Musically, Julie Slick’s style is similar in approach to Tony Levin‘s work on mid-period King Crimson (Discipline, Beat, Three of a Perfect Pair) with some later-period Crimson (ThraK) thrown in for good, menacing measure. But these songs won’t be mistaken for Crimson outtakes; she’s very much her own composer. Except when she’s not: the master — Robert Fripp — is on board, albeit in a disembodied fashion of sorts: the track “Choke” is built in part upon the recording “Scanning II” from Fripp’s League of Crafty Guitarists project. This phoned-in frippery is applied to good effect on other tracks as well.

This is melodic, accessible progressive music with melodies that will stick in the listener’s head long after the disc play has ended. There’s plenty of muscular and inventive musical interplay to keep prog fans excited, as well. Julie Slick is that rarest of collections that balances those two worlds. Recommended.