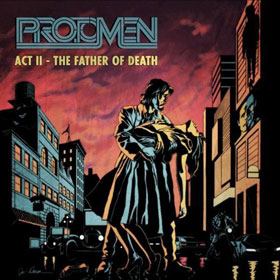 This is a decidedly strange one. If you’re the sort of music enthusiast who feels that rock music has lost its over-the-top, bombastic edge since the passing of the era of such epics as Meat Loaf‘s immortal Bat out of Hell, then I’ve got some good news for you. If you’re looking for dance music, keep moving: nothing to hear, here.

The new Protomen release is entitled Act II – The Father of Death. Even before you remove the shrinkwrap of the glossy digipak, you’ll know you’re in for something a bit, er, different. High contrast comic book (or, shall we say, graphic novel) artwork adorns the package. It’s clearly telegraphed that the music within will lean more toward the angsty, doomy direction of The Dark Knight rather than say, Archie and his pals.

The music itself is the sort that requires the listener’s attention. Engaged, involved attention. There’s a story here, and if you just let the music wash over you, you’ll miss it. The enclosed libretto — and I use that pretentious term advisedly — will help keep you on the right page, so to speak.

Melodramatic, sweeping string arrangements and Spanish guitar weave in and out of a mix that’s largely dominated by spaghetti-western guitars and horns, and atop it all is a grizzled narrator. There is a distinct air of self-importance, of near-humorlessness about this music. Comedy it ain’t. The Protomen are swinging for the fences in their attempt to conjure up an epic vibe, and to the extent that such a thing is possible, they’re reasonably successful. Jim Steinman would be proud.

I could go on about individual tracks, but doing so would be akin to discussing a chapter in a novel: the songs are designed — for the most part — to be taken in context. Still, a few standout tracks do hold up quite ably on their own. “The Hounds” is a stunner. The unequivocal highlight of the disc, the song brings together all of the best qualities of the Protomen — punchy horns, wailing lead guitar, propulsive beat, melodrama — while not falling victim to the exposition/link track curse. Think of it as a cousin of The Wall‘s “Run Like Hell.” While much of the rest of Act II – The Father of Death has more in common with Pink Floyd‘s “The Trial” in that it exists primarily to move a narrative, “The Hounds” simply kicks, and kicks hard. And the track “Breaking Out” weds showy rock-opera style with plain old rock.

Those two songs alone are worth the price of admission. But if you don’t dig the narrative-heavy approach of the rest of the disc, you may find Act II – The Father of Death rough going. If you want to listen, if you’re up for a story with epic ambitions, then set aside some time to spend with the new album from the Protomen. If you simply want to rock, Act II – The Father of Death provides you with select — if not ample — opportunities to do so.