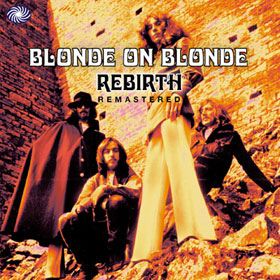 The liner notes stole my word. Fantastic Voyage’s new reissue of the 1970 LP Rebirth by Blonde on Blonde includes well-researched liners that provide context about this British (Welsh, really) progressive outfit. And lead vocalist Gareth Johnson has a unique style that the liner notes succinctly peg as “declamatory.” Sadly there’s no suitably accurate synonym, so I’ll simply have to recycle the word. Declamatory.

Like many of the psych/progressive acts that came out of the late 60s scene, Blonde on Blonde had a style informed by a wide array of influences. Yet the group’s sound is fairly straightforward, with trebly, muscular bass lines, crackling drums, lots of fuzz and reverb on the guitars, and yes, declamatory vocals.

Instrumentation, too, is rather no-nonsense. You won’t find a lot of synthesizers or Mellotrons on Rebirth: piano and organ are the keyboards here. And the melodies are, at their core — based upon traditional songcraft. But despite all that, there’s a mannered, baroque delivery to the songs, tempered with an aggressive instrumental attack that sounds like — of all things — the Who.

The rhythm guitar on “Broken Hours” sounds a lot like the sort of slashing, jangly approach Pete Townshend used on Tommy. And though the drumming is precise, there’s enough of a hint of reckless abandon to warrant passing comparison to Keith Moon.

“Heart Without a Home” is the most accessible track on Rebirth. With a droning sound redolent of jaw harp or digideroo, and a pulsing bass line reminiscent of Norman Greenbaum‘s “Spirit in the Sky,” the catchy melodic line and memorable chorus all come together to sound like a hit. But Rebirth wouldn’t be hit-bound.

“Time is Passing” heads in much more of a progressive direction, with an acoustic guitar centerpiece that calls to mind Forever Changes-era Love. And the manic opening of “Circles” sounds like a cross between the Open Mind and early King Crimson; this is heavy prog not unlike that of equally-obscure UK psych/proggers Armageddon. Oddly, this track — not “Heart…” or the relatively poppy album opener “Castles in the Sky” — was chosen as the album’s single. The shockingly overdriven (and close-mic’d) guitar solo will either please or turn off listeners; there’s no middle ground. A single edit/mix is included as a bonus track on this Fantastic Voyage CD reissue.

The freakbeat-y “November” is another winner, but for anyone who doesn’t appreciate Johnson’s vocal style, this is the one that will push you past your limit. A spare arrangement gives sharp focus to the instrumentation that is included.

Its twelve-plus minute runtime is a dead giveaway that “Colour Questions” is Rebirth‘s most ambitious number. Lots of shade and light here: long instrumental passages, the good old contrasts of loud/quiet, fast/slow, are all used to good effect. An especially psychedelic guitar approach has subtle hints of the Who’s “Sparks,” but the ambition of the track has more in common with “A Quick One (While He’s Away).” That said, listeners looking for the leavening effects a bit of humor might offer are advised to keep searching; it ain’t here. But “Colour Questions” is the high point of Rebirth, and a worthy exemplar of the heavy prog/psych genre overall.

Blonde on Blonde wisely ratchets the melodrama down a few notches for the album closer “You’ll Never Know Me / Release”. A bright, stately piano holds the song together. In fact, the group’s use of straight piano — rather than synths etc. — to achieve the progressive aesthetic is most effective on this track.

If you like progressive rock without all the hobbity gnomes-and-fairies trappings, preferring instead an aggressive, nearly malevolent instrumental attack, then Blonde on Blonde’s Rebirth is for you. Dig it.