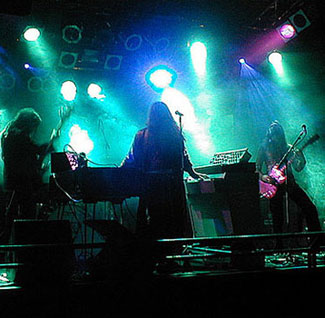 I had seen Bigelf before. As related in earlier features, I attended the Asheville NC engagement of the 2009 Progressive Nation tour, and was delighted to discover this new (to me) band that sounded like Black Sabbath with Mellotrons. I found their visual aesthetic both over the top and appealing all at once. Vocalist, front man and keyboardist Damon Fox stood at the front of the stage, with a straight mic stand in front of him. At each side he had keyboards: Minimoog, Mellotron, Hammond organ, etc. Guitarist Ace Mark staked out a position in front of some huger Orange amplifier stacks. Froth wailed away on a relatively small drum kit, and left-handed Duffy Snowhill held down the bottom end. Great show, good sound, but short set.

Not long thereafter I was fortunate to get some time with Fox. We went on at considerable length discussing keyboard and other arcane subjects. Then a few months ago I learned that Bigelf was touring the USA opening for Porcupine Tree, another act I follow (my interview with Steven Wilson is here). So I immediately made plans to travel to Charlotte NC for the show.

Some might think the pairing of Bigelf and Porcupine Tree an odd billing. Porcupine Tree’s music combines the best of classic progressive rock stylings with a modern metal aesthetic. The group’s music is powerful, expressive and often emotional. What it isn’t — with rare exceptions — is playful, whimsical or in any way humorous. 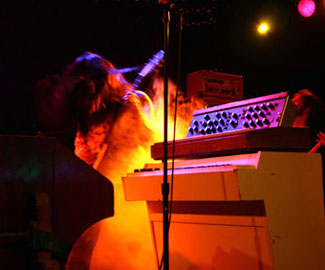 Bigelf, on the other hand, try (and succeed) at having it both ways. The four-piece serves up the power, with crushingly heavy riffage, (sometimes) doomy tempos and old-school (circa 1973) arena rock trappings. But they’re also winking the whole time. Stovepipe-hatted Damon Fox is having a laugh, but significantly, he’s having it with the audience, not at them. The music has fun as one of its foundational elements, even when Fox is singing about the evils of money or being blackballed.

The 2010 shows represent some significant departures from the feel of the Progressive Nation dates. On the ’09 tour, Bigelf had huge stages within which to work. The band was able to spread out, and Ace brought all his groovy Orange amps. In the confined space of the tiny stage at Charlotte’s Amos’ Southend, Bigelf was crammed into an area at the front edge of the stage (headliner Porcupine Tree’s equipment was set up behind them). Ace kept half of the amps at home, and everything seemed sort of piled on top of itself.

But that didn’t prevent Bigelf from bringing the show. Fox took advantage of the intimate vibe of Amos’ Southend to engage the audience in witty banter. The band seemed at once looser and more in command of their material than they had at the (also excellent) Prog Nation date. 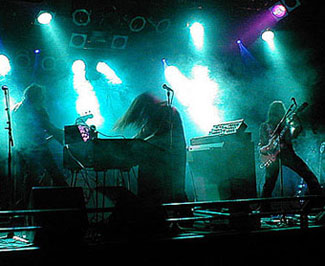 Porcupine Tree’s Steven Wilson runs a tight ship: as a fellow concertgoer told me — he had seen several dates on the tour — Wilson kept the evening’s proceedings on a very strict schedule. So Bigelf would be hitting the stage exactly at 8pm, he told me, and they would play exactly forty minutes.

Not so. Deciding they wanted to give the audience more, Bigelf came out a full ten minutes early, and played right up to their scheduled finish time. After the band got through its first song, the audience — most of whom clearly were not familiar with Bigelf — was completely won over. Unlike the brief Progressive Nation set that highlighted tracks from the 2008 album Cheat the Gallows, the Amos’ Southend show concentrated more on older Bigelf material, much of it from their 2005 release Hex. While the audience largely didn’t know the difference, the Charlotte set presented a more balanced overview of the Bigelf sound.

I spoke to Damon Fox and Ace Mark after the show, and Fox explained that they felt it was time to change things up a bit, having played the Cheat the Gallows material on both the US and European legs of the Progressive Nation tour. 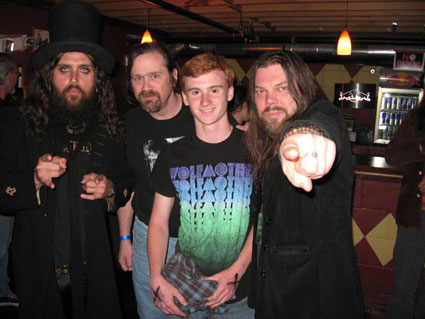 Doubtless the opening slot on the Porcupine Tree tour is opening Bigelf up to new audiences, and if this night’s crowd was any indication, there will be an increased built-in fan base waiting for the next album from Bigelf.

Here’s their latest video, the track “Superstar” from Cheat the Gallows. Ace is playing what looks like a damn careful copy of the infamous “Fool” Gibson SG, an instrument that has belonged to Eric Clapton, Jackie Lomax and Todd Rundgren.