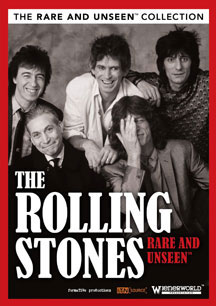 The Rolling Stones: Rare and Unseen is another in the ongoing series of newsreel and interview compilations focusing on well-known rock acts. This reviewer took a look at The Beatles Rare and Unseen in 2009, and a John Lennon volume is due soon. Yes, this series generally deserves the alternate title Cheap and Uneven, but the Stones entry is not without merit.

There are some common threads running through the entries in this series. None of the artists’ music is featured (doing so would incur major costs for the compilers, and as you might expect, these things are done on the way-cheap). There’s often little or no chronological narrative, no rhyme nor reason to what gets included and what’s left out; again cost and availability are seemingly the major determinants of Rare and Unseen content.

But in the same way that a stopped clock is right twice a day, occasionally a Rare and Unseen volume puts together something of value. And in this case, that’s what has happened. The producers of this roughly hour-long DVD have done a reasonably good job of cobbling together interview and paparazzi-type film clips of the Rolling Stones from throughout their career.

There are early black-and-white interview clips (complete with the inane interview questions of that pre-rock critic era), and the Rolling Stones‘ cheeky, no-bullshit attitude comes through: you’ll see the eye-rolls in reaction to said stupid questions. Even in ’65 Mick Jagger did not suffer fools gladly.

There’s a pie fight from what looks to be 1967. There’s a mid 70s interview with the generally reticent Bill Wyman; it takes place outdoors on the eve of some or another festival-type gig, and it’s broken into pieces and scattered throughout the DVD. The same treatment is given to some interview outtakes featuring Jagger and Jools Holland, circa the late 80s or perhaps a bit later. (Those are guesses; annotation is never a strong point on these releases, and end credits? Fugeddaboudit.)

The presentation is fairly well balanced: the compilers even managed to include brief interview clips of Mick Taylor (one from early in his Stones tenure, one quite recent). And we even get the rare and generally unseen pleasure of brief interview clips featuring Brian Jones, and some with Charlie Watts.

The most recent clips include some red-carpet premiere paparazzi interviews with the corpse of Keith Richards (just kidding, folks). And while the rarity of some of these clips might be down mainly to their marginal interest, the way the material has been strung together actually makes it more interesting. There’s almost (but not quite) a narrative at work here. Early quotes from Jagger are juxtaposed with later footage that contradicts whatever assertion he might have made. And it’s done so in an amusing fashion.

Back in the 1980s, soon after the rise of MTV as a cultural force, USA cable network began running its own late-night amalgam of music clips and concerts. That program, USA Night Flight, seemed to have access to much more in the way of archival footage, and would sometimes run some items viewers couldn’t see anywhere else. One particular clip was ubiquitous: it was near impossible to turn on Night Flight without catching the beginning or end of a newsreel called World In Action. Opening with the odd sight of a helicopter landing in an English garden, it featured Mick Jagger conversing on issues of the day with hat looked to be a vicar and a member of Parliament (the governing body, not the funk group). Strange stuff, but fairly interesting. And, not really rare or unseen. Anyway, excerpts from that reel are scattered throughout The Rolling Stones: Rare and Unseen.

The Rolling Stones: Rare and Unseen is by no means perfect. Beyond the low-budget aesthetic and no-Stones-music issue (both of which are understandable and forgivable), two problems threaten to ruin the DVD. First, the producers have obviously been watching too much Pop-up Video on MTV or VH1 or whatever the hell it is. Attempts are made throughout to bring the snark via these little pop-up commentaries, and they add little beyond annoyance. Thankfully, the use of this tired device is inconsistent: there will be a bunch of them, then they’ll disappear for several minutes, then they’ll return.

Secondly, when some silent archival footage of the band sort of milling around is shown, the producers overdub some ersatz-Stones instrumental music. Cliché-ridden at best and distracting at worst, this faux Stones music calls far too much attention to itself.

In summary, Rolling Stones: Rare and Unseen is among the best of its ilk. Damning with faint praise is the best I can do here: for Stones fans, it’s definitely worth an hour out of your busy life (there is no bonus material to weigh you down), and it’s up to you to decide if the MSRP of $14.95 makes it worthwhile or not.