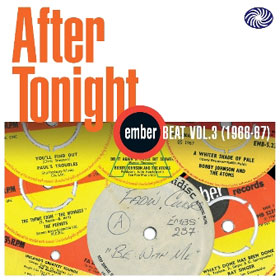 The third and final in Fantastic Voyage’s survey of UK beat music, After Tonight takes a look at singles from beat (and beat-related) artists on the indie Ember label in 1966 and 1967. Like its two predecessors (Tell Me and Done Me Wrong), After Tonight compiles a- and b-sides that haven’t shown up on other collections. And like those sets, there are some weak numbers, some good tracks and some heretofore undiscovered gems.

What there isn’t is any music from Chad & Jeremy. See those earlier sets to get your fill of them. Instead After Tonight serves up artists like The Clockwork Oranges, who — despite their trendy moniker — are neither menacing nor (this reviewer believes) British. Interesting, though.

Heavier, more aggressive sounds were storming the charts by ’66, yet many of the sides on After Tonight lean toward the standard pop fare. But just when the listener gets lulled into complacency by an insipid number like Ray Singer‘s “Look in Your Eyes,” along comes a swaggering number like “Ah Oop” by…Ray Singer. Surprise.

The arrangement on Just Five‘s “I Will Have You” suggests that UK musicians were listening to American folk-rock artists like the Beau Brummels. And the out-of-tune guitars on “Answers Please” by Luvin’ Kind makes this listener wonder — just for a brief second — if any of those ultra-rare Green Fuz singles made it across the Atlantic. And lyrics like “how about the gamma rays, my friend” serve up shades of another Texas legend, Roky Erickson.

Covers are more in evidence on After Tonight than on earlier volumes. A horn-laden “(Just Like) Romeo and Juliet” from The Fadin’ Colours is surprisingly effective, especially when the surprising (yet frustratingly brief) fuzztone guitar solo kicks in. But that group’s “Billy Christian” is pop-skiffle. With Herb Alpert-styled horns, no less.

Bobby Johnson & the Atoms cover Procol Harum‘s “A Whiter Shade of Pale,” adding little or nothing of value. But the other sides by that group offer a pleasing cross between pop and r&b. The shamelessness of covering the Monkees‘ theme (here by a studio concoction dubbed the Peenuts) is surpassed only by that record’s picture sleeve (reproduced in After Tonight‘s booklet) depicting the actual Monkees.

The Fadin’ Colours were either an incredibly versatile group or a name applied to whomever was in the studio. Because “Be With Me” sounds nothing like the earlier previously discussed sides. It sounds instead like a great lost Rolling Stones number, as does “You’re No Use.” Both tracks ranks as must-hear.

With an excitement quotient a slight notch below its predecessors, After Tonight remains well worth seeking out. As a collection of relatively unknown artists performing unheard music, After Tonight is — like the two earlier volumes in the series — superb.