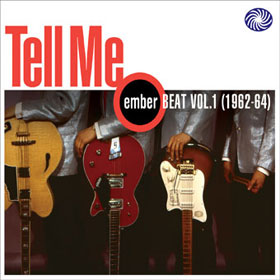 A quick word on terminology for the uninitiated. While in the USA we called rock-oriented pop music out of England in that fertile period (very roughly covering 1964-66) “British Invasion”, obviously such a term wouldn’t do at home. In the UK that sort of music was called beat.

In fact the term is especially apt here, since not one of the Ember sides, er, invaded the USA. Unlike some of Ember’s re-release efforts — in which they’d re-release American cuts in the UK for domestic consumption — this was pretty much home-grown music for the home counties and slightly beyond.

Even within that context, Fantastic Voyage plays suitably fast and loose with genres, never letting the constraints of genre labeling get in the way of a good song. Though not all of the material rocks; some of it is little more than insipid, disposable pop. But even the weakest and/or most derivate cuts offer a kind of naïve, goofy charm.

The first disc in the series is titled Tell Me, and covers 1962-64. Here, listeners will find combos very influenced by Buddy Holly (by way of the Shadows) on tracks like Carter, Lewis & the Southerners‘ “Tell Me.” A popular approach of the era was to set classical music themes to a beat, and Ember’s entry in this dubious sweepstakes was the Sunsets‘ “Mountain King.” (This is what I mean by goofy charm; it’s not at all bad, and presages The Nice and ELO by quite a few years.)

Chad Stuart and Jeremy Clive may well have been right decent lads, but it was them I had in mind when I used the term insipid. Not awful in any qualitative way, the Chad & Jeremy numbers — and there are several — on Tell Me take on Simon and Garfunkel at their own game. And they lose.

Some real gems exist. The John Barry Seven, fronted by the man who’d go on to massive soundtrack success, turn in some thrilling instrumental numbers that point the way toward Barry’s successful cinematic (in feel as well as application) formula. “Monkey Feathers” would fit nicely on an Austin Powers soundtrack.

Perhaps the most exciting discovery on Tell Me is a song called “Me” by a combo billed as A Band of Angels. Fronted by one Mike D’Abo (who’d go on to fame as Manfred Mann‘s lead vocalist), A Band of Angels turned out some thrillingly high-charged numbers. And while “Me” is the best among these, the other three are well worth seeking out.

In fact, those Chad & Jeremy numbers aren’t so bad. Rock they do not, but their inclusion on Tell Me is effective in a sense: the disc in a way recreates what a pop fan of the era might have heard when they ventured away from the major hits of the day. And while the other artists on the disc are less household names than D’Abo, Barry or Chad & Jeremy, their sides are well worth hearing nonetheless. Lorne Murdoch’s liner notes hit the high points and drop enough tasty crumbs to put interested parties on the trail of more in this vein.

The first stop for such interested parties should likely be Done Me Wrong, the next entry in the series. Stay tuned.