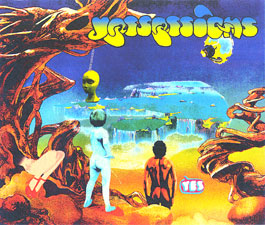 Here’s one for the prog fans. Yes was among the best groups to hybridize progressive and popular styles. With Jon Anderson‘s pliant upper-register vocal juxtaposed against Chris Squire‘s assertive bass playing, the group made complex music for the masses. The group boasted classically-influenced guitar from Steve Howe (or Peter Banks on the early tracks), inventive and nimble drumming from Bill Bruford (and later, Alan White) and powerful keyboard work from Tony Kaye (and later, Rick Wakeman).

YesSessions is a relatively careful compilation of Yes and Yes-related rarities from the period 1967-1973. The three-disc set brings together various tracks (both live and studio) that fans of the art/pop group should enjoy. And there are gems for non-Yes fans as well. Disc One kicks off with some pre-Yes material. First up are the A- and B-sides of 1967 singles by The Syn (featuring future Yes bassist Chris Squire). “Created by Clive” is a fruity, twee, veddy English pop single that could only have come from ’67. In fact, other groups (including The Attack) recorded it as well. Clever but forgettable. The B-side “Grounded” is an excellent raveup in the freakbeat style. Both sides of The Syn’s 1967 hit single are included. “Flowerman” is, again, disposable. But “Fourteen Hour Technicolour Dream” (a tribute to a London musical “happening” of the era) is a classic. These four tracks represent the entire recorded output of The Syn in the 60s (the group reunited in 2005).

The next three tracks are something of a Holy Grail for Yes fans: three BBC performance tracks by Mabel Greer’s Toyshop (basically Yes before they wised up and got a clever name). These tracks date from March 1968; audio quality is only good, but their historical importance means that we don’t quibble. The middle section of the unreleased track “For Everyone” eventually resurfaced as part of “Starship Trooper” on The Yes Album. The extended arrangement of “America” is a hint at where they’d soon head musically. Conversely, the standout “Jeanetta” teasingly suggests another direction Yes could have pursued. The remainder of Disc One includes other early radio broadcasts, primarily from 1970-71, and three tracks from a Swedish concert (also ’71).

Disc Two kicks off with another oddity: a long onstage jam (the next day, still at the festival in Sweden) featuring Yes augmenting Iron Butterfly. Most of the remainder of the disc features the audio tracks of Yes TV performances from 1971, doing well-known numbers from The Yes Album on German and UK television. In the middle of solo spotlight “The Clap,” Steve Howe inserts an ace rendition of Mason Williams‘ monster hit “Classical Gas.”

The third disc starts off with a rare 1971 demo recording of “Roundabout.” But the highlight of the final disc is a 1971 BBC concert recording, including six songs. The disc is finished off with some promo/alternate versions of later-era (Tormato) Yes.

Put together in 1999, the set comes packaged in one of the older-fashioned CD cases (like The Beatles‘ Anthology volumes) and the artwork is an unauthorized (natch!) Photoshop amalgam of Roger Dean‘s work for Yes. The set could have included some of Jon Anderson’s pre-Yes work (with various short-lived acts) and Steve Howe’s excellent playing with Tomorrow, but since it’s a bootleg/pirate there’s no one to whom to address such complaints. Some of this material has seen official release (the Syn singles, some of the BBC sessions) but overall it’s a worthwhile addition to the extensive Yes canon.

Difficulty to Locate: 7 out of 10
General Listenability: 6 out of 10