DVD Review: You Really Got Me — The Story of the Kinks 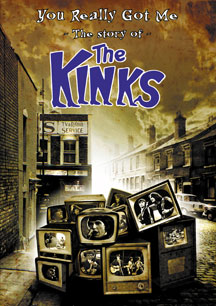 When it comes to You Really Got Me: the Story of the Kinks, there’s good news and bad news. The good news is pretty simple: it’s the Kinks. This British group was among the most rocking and intelligent acts of the 1960s and beyond; the Kinks were the group about which Lillian Roxon wrote, “The Kinks are probably the one group most admired by other musicians and certainly the one invariably held up as an example when someone is trying to prove the Beatles aren’t all that good and that there are groups that were doing cleverer things earlier.” Wordiness notwithstanding, Roxon’s point is a valid one. And You Really Got Me: the Story of the Kinks does indeed contain a whole bunch of video clips of the band.

I’m sorry to report that here endeth the good news. This video has a number of problems; in fact the issues are so myriad that enumerating them isn’t worth the time. Suffice to say that the DVD suffers from three basic problems.

First, video quality is shoddy. Most of the clips look as if they were sourced from a worn VHS dub. Stills look like they were gathered using a web browser and several mouse right-clicks. Collectors will have some of this material in their own collections, on unofficial compilations, in better quality. The sound is dodgy and inconsistent as well.

Two, the narration is often factually wrong and presents the story out of sequence. In one part, the narrator tells us that Mick Avory is fired from the band. Next up: an MTV-era video of the band, clearly featuring Avory. Album releases are discussed out of order (this is no quibble: the story purports to be linear. It ain’t). Album titles are mangled. Most egregiously and unforgivably of all, throughout the 88-minute runtime, the narrator insists on mispronouncing the surname of Ray and Dave. Though it’s spelled Davies, it’s properly pronounced “Davis.” Anyone with more than a slight passing knowledge of the band should know this; someone attempting to make a documentary on the band has no excuse.

Three, it’s pretty much a lazy effort. While there hasn’t been a Kinks retrospective on the scale of the Who‘s The Kids Are Alright, there is a fair amount of Kinks video out there. Again, ask a collector. And while it’s true that licensing issues and budgetary constraints are always an issue, it seems clear that with a bit more effort, the compilers could have crafted a more balanced portrait. Nearly half of the video clips are sourced from the Kinks video concert film One for the Road, and a big chunk of the remainder comes from a Japanese concert video of roughly the same vintage. So viewers get some great live concert footage of songs from throughout the kinks’ career, but most of it is from two concerts in the early 80s.

The full video of “Predictable” is included (in lousy quality). Its inclusion clearly has more to do with its being available for this set than with any artistic merits or musical significance.

I could go on. The point is, until a better compilation comes along, this is worth a quick view, but the problems with You Really Got Me: the Story of the Kinks clearly outweigh the good points. Ray Davies can’t be happy about the existence of this near-bootleg quality DVD. And that’s an insult to bootleggers, who often understand the artists and put together decent packages.