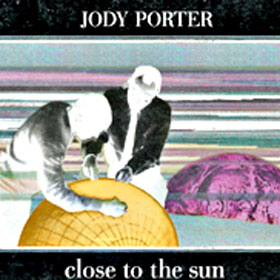 Rock history is littered with examples of artists who need to break out on their own to fulfill their creative ambitions. Sometimes they are able to do it while remaining in the group they’re in — keeping their day job, as it were. John Entwistle stayed in the Who while mounting a simultaneous solo career that reaped critical (if not commercial) rewards.

But oftentimes an artist’s frustration builds in the face of a situation within which (at best) their own songs simply don’t work, or (at worst) their creative input isn’t welcome. Or, where there simply isn’t room. George Harrison (Beatles), Jason Falkner (Jellyfish, Grays)…the list goes on and on.

Thankfully, it seems that guitarist Jody Porter is making a go at having it both ways. As a member of the always engaging Fountains of Wayne, Porter handles the lead guitar work. But being in a band with Chris Collingsworth and Adam Schlesinger means there’s not many opportunities to get your own songs on a record: those guys write pure pop perfection.

But, as listeners will discover if they pick up Porter’s solo album Close to the Sun, Jody Porter’s no slouch himself. While his voice won’t be mistaken for that of Collingwood or Schlesinger, and his songwriting makes no attempt to ape their approach, Porter’s clearly a kindred soul: the fourteen songs on Close to the Sun should find sympathetic ears among FoW fans.

Unsurprisingly, since Porter is a lead guitarist, at times his songs rock a bit harder, possess a slightly harder edge than those of his band mates. But on tracks like “Waiting for the Stars” the emphasis is squarely on melody of the powerpop variety. Hooks, jangle, power chords, jubilant harmonies…they’re all there.

Yet as powerpop fans know, all those items do not a great song make. But Porter knows his way around a good melody, and the cuts on Close to the Sun have staying power: they’ll stick with the listener after the disc is done spinning.

Porter changes up the instrumentation and arrangement, making for a pleasingly varied album. “To the Moon” throws analog synth, electric and acoustic pianos, and guitars set on stun into the mix, creating a head-nodding number in that heady (heh) mid 70s style.

“Cars on the Motorway” sports a swaggering, propulsive late 70s vibe full of dynamics. Imagine a non-annoying Billy Squier and you’re in the ballpark of the song’s feel. “You’re Not Alone” sounds a bit like Smashing Pumpkins with stronger hooks.

The album isn’t front-loaded: the song quality remains high throughout. The Tommy Keene-like “The Little Things” even throws in a bit of “ba ba ba” backing vocals, rarely a bad thing. And there’s plenty of tasty lead guitar throughout the record; Close to the Sun is perfect for high-volume playing while driving. “Hide in the Light” travels in a Britpop direction; fans of Blur, Oasis, Kula Shaker and the like won’t want to miss this one; it could almost pass for a great lost Stone Roses cut. And the soaring “In Between Time” throws disparate elements together — ones you wouldn’t think would work together, trust me — to create what’s perhaps the strongest track on a strong album.

Close to the Sun is enthusiastically recommended to fans of straight-ahead, hook-filled rock/powerpop. The album’s gimmick-free production puts the focus squarely on the songs. Porter doesn’t strike the wry commentator stance of Collingwood and Schlesinger; his lyrics are more direct but no less compelling. There’s enough stylistic variation to keep things interesting, and enough cohesion and consistency to render the songs as a unified album as opposed to a mere collection of songs.