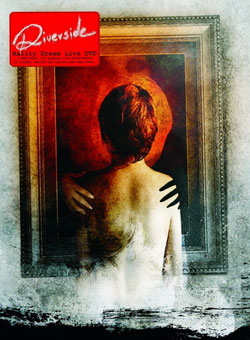 Sometimes a band’s name tells you something about the group. If you call your combo the Sex Pistols, you’ve successfully managed to telegraph the idea that you’re a provocative act. If the name of your band is A Place to Bury Strangers, Bullet for my Valentine, Funeral for a Friend, or some other polysyllabic non sequitur, we know you’re one of a seemingly endless assembly line of boring, faceless 21st century bands suffering a fatal deficit of imagination.

But if you call yourselves Riverside, then we really don’t have any idea what to make of you. Okay, since you’re a four-piece from behind the former Iron Curtain, you earn something of a pass: maybe it’s lost in translation.

Riverside, in fact, is a progressive-metal band from Poland, and they’re pretty good. Employing a musical style closer to Porcupine Tree (a band oft-mentioned on these pages, and you can expect more in the future, so there) than to Metallica or Tool, Riverside does do the whole tricky time-signature, fast-slow, loud-soft thing. Lead vocalist (well, nearly only vocalist) and bassist Mariusz Duda sings the band’s lyrics in English, and while the band’s recent DVD concert set Reality Dream doesn’t reprint the lyrics, Duda sings them clearly enough, with a slight accent that’s not at all off-putting or distracting.

Thankfully there’s not a lot of metallic screaming on Reality Dream (though there is some, so you’ve been warned). Duda’s voice is strong and clear. Like many prog bands, Riverside favors longish numbers: the opener goes on for a full six minutes before the vocals kick in.

Riverside gives good value for money on Reality Dream: between the two DVDs in the set, the equivalent of an entire show is included. Songs from the main concert that didn’t make the cut are included as bonus tracks taken from other shows in 2006-2008.

The band’s musical approach is quite tuneful; while they execute deft musical hairpin turns, they do so in a way that’s melodic and memorable. Though guitarist Piotr Grudziński — a bald, tattooed gent who would look right at home in a headbanging metal band — plays but one electric guitar throughout the show, his effective and subtle use of effects allows a lot of tone color. One minute he’s hammering out Satriani-style runs; the next he’s picking an acoustic-styled melody. And Duda manages to sing while playing reasonably intricate, thick bass melodies.

Keyboardist Michal Lapaj leans toward sounds and textures that integrate into the band’s aesthetic without demanding the spotlight. Though a nimble player, Lapaj cedes the attention to the guitar more often than not. Drummer Piotr Kozieradski ably executes the demanding time signatures the music requires.

In recent years, the standard for concert videos has been set quite high: smooth camerawork and use of multiple angles is de rigueur. Reality Dream does not disappoint. The show was filmed in the relatively controlled environment of a smallish club-like studio setting, in front of an appreciative Polish audience. Duda’s brief between-song banter is completely in Polish.

The post-production is another matter. While it’s professional, it’s also disconcertingly familiar. Anyone who’s witnessed any of Lasse Hoile‘s work for Porcupine Tree (yeah, them again) will recognize many of the effects used on Reality Dream. The whole filmstrip-superimposition thing was pretty cool when Porcupine Tree used it several years ago on their own concert DVD, Arriving Somewhere… But on Reality Dream, it’s not only reused, it’s over-reused.

That said, for enthusiasts looking for concert videos from progressive bands who avoid falling completely into the metal side of things, you could do far worse than check out Reality Dream. While there are no songs on the par with the best work of that band I’ve mentioned several times, there’s plenty of good music within these discs.