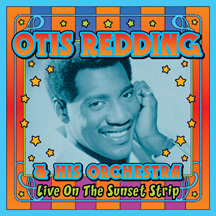 Are you ready for Star Time? You’d better be. Three live sets of Otis Redding are — or should be — coming your way. Live on the Sunset Strip presents the incendiary onstage performance of Redding — clearly at the top of his game — live at the Whisky A Go Go.

A fair amount of this material has seen release before, but only in chopped-and-edited fashion on earlier collections like 1968’s In Person at the Whisky A Go Go, 1982’s Recorded Live and 1993’s Good to Me: Recorded Live at the Whisky. This, friends, is the real deal. Picking up with the third set from the second show or Redding’s four-night residency at the Whisky, the band storms right into “Security,” and Otis delivers the goods.

Normally a raucous live act wouldn’t dial things down after the first number, and since this collection picks up mid-show, that’s not exactly what happened. Nonetheless, listeners are served up the slow jam of “Just One More Day,” and in Redding’s capable hands, it works. His singing is expressive almost beyond description, and the band absolutely kills.

And on it goes. Redding and his backing band crank out the songs one after another, with barely enough space between them for the singer (or the audience) to catch a breath. The sets on these discs are long on covers, though the term “cover” somehow fails to properly convey what Redding does to songs like “A Hard Day’s Night,” “Papa’s Got a Brand New Bag” and (three renditions of) the Rolling Stones‘ “(I Can’t Get No) Satisfaction.” On the latter tune the band punches the horns and strips the song down to its basic element, resulting in a two-chord barnburner replete with honking sax solos.

The sound quality on Live on the Sunset Strip is stunning for a concert recording made in 1966, or any other time. Offering all the clarity and balance of a studio recording, the 2cd set is rife with the immediacy that comes only from a performance onstage in front of an audience. Wally Heider‘s mobile unit deserves the credit for capturing the sonic essence of Redding and his band.

Modern-day listeners may be familiar with some of these songs in versions by other artists — “I Can’t Turn You Loose” was done to good effect by Edgar Winter’s White Trash, and later by the Blues Brothers. But hearing Otis Redding sing these songs — backed by his traveling orchestra — is the definitive listening experience.

Redding’s star burns brightly on this set, and in the months after these show, his profile would rise even higher. He’d earn several more hit singles and turn in a great performance at Monterey Pop, but some twenty months after the April ’66 Whisky dates, he tragically lost his life in an airplane crash.

Otis Redding’s catalog isn’t really all that deep. His recording career was pretty much confined to the years 1964-1967, and the available Redding collections all but trip over each other. And while Live on the Sunset Strip doesn’t include his later hits like “Fa-Fa-Fa-Fa-Fa (Sad Song)”, “Try a Little Tenderness” and the posthumous hit “(Sittin’ on) The Dock of the Bay”, it’s nonetheless the definitive Otis statement. If you can only spring for one Redding set, this one even edges out last year’s best-of set The Best — See & Hear. Of course, many listeners — like this one — will want it all.