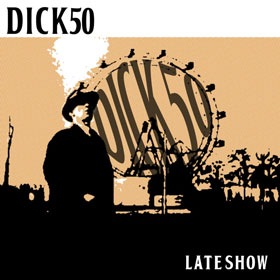 Critics have a predilection — for both good and ill, one supposes — for labeling, for pigeonholing. And it’s useful too, when you get right down to it. Though some bristle at the idea — some months ago a commenter took issue with a review of mine, complaining about critics’ insistence upon the “compare and contrast” formula, as if such an approach was a bad thing — some degree of labeling can help the reader form some basic ideas about the music under consideration. Will I like this? Well, if the reviewer (in whose opinion I place some level of trust) says they sound like a cross between the Bay City Rollers and Metal Machine Music era Lou Reed, well, that’s a useful touchstone.

That said, it’s admittedly delightful when a CD crosses this reviewer’s desk, and attempts to label it are confounded. So it is with Dick50. This four-piece act out of Nashville is comprised of four seasoned session players, and perhaps the versatility required to be a Nashville cat explains why the group is so difficult to pigeonhole. Dick50 has just released their debut album Lateshow, and the disc’s eleven tunes show their taste and versatility.

Perhaps — if the term weren’t such a loaded one, fraught with baggage this reviewer often finds less than compelling — the music of Dick50 could be labeled Americana. Within their grooves are the influences of country, soul, r&b, greasy roadhouse rock and roll, and more. But Dick50 blends it all into an appetizing stew.

Onstage, Dick50 is equally hard to pin down. A song might kick off with Rob McNelly cutting a Memphis-styled lick a la Los Bravos‘ “Black is Black” (Lateshow‘s opening track “Like You Did”), but when the band comes crashing in with their forceful and highly melodic arrangement, the dual lead vocals and clavinet-centered groove takes the song other places. And a heavily Leslie’d guitar solo is so brief as to leave the listener all but begging for more.

On “Flyin’ Now” Dick50 rocks every bit as hard as, say, the Black Crowes, but with more shade and light in their arrangement. Frequent changeups in a song’s meter are a hallmark of the Dick50 sound, but that variety isn’t of the look-ma-I’ve-got-chops gratuitous variety.

Fans of pretty much any mainstream American musical form will find plenty to like on Lateshow. The vocal harmonies sometimes evoke a Memphis version of Hall and Oates, and the lyrical content serves up that storytelling that c&w fans so dig. (Check out Lateshow‘s “2012” for amusing and memorable proof of the latter: “Once we get to Armageddon, then we’ll get to the heavy pettin’.”) Dick50 don’t sound like Booker T & the MGs, but their level of taste is certainly in the ballpark of that revered group.

The group’s live show displays the breadth of Dick50’s prowess. Currently on tour with Delbert McClinton, Dick50 takes the hard-gigging approach of opening with their own set, then returning to back McClinton for his headlining show. The quartet is possessed of chops so impressive that they can deliver their original songs with personality, then turn around and provide high-energy, sympathetic backing to Delbert McClinton. This is a band to watch.