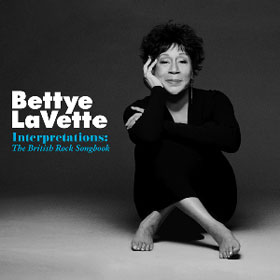 As the old adage goes, a great song is a great song. The best songs bear reinterpretation in a variety of styles. And while covers often don’t really add anything new to a song (other than perhaps exposing it to a market segment that might have otherwise missed it), sometimes the reinterpretation breathes new life into a song.

Bettye LaVette understands this. The R&B-soul diva has put together a complete album of just this sort of thing. On Interpretations: the British Rock Songbook, LaVette and her band reinvent songs from the Beatles (and three of the four solo Beatles), Animals, Moody Blues, Led Zeppelin, Elton John, the Who, Pink Floyd, Traffic and the Rolling Stones.

Some of the reinterpretations work better than others, but in all cases LaVette endeavors to make the songs her own. She never covers the original arrangement, and in fact many of the songs get radical reworking. The melodies always stand up to the reinventions, because, well, they’re great songs.

LaVette doesn’t always take the easiest, most obvious path. The Beatles‘ “The Word” isn’t among the group’s most oft-covered numbers, and that fact alone makes Interpretations worth hearing. But LaVette’s searing, versatile and expressive voice — coupled with tasteful, sympathetic arrangements — is the real showpiece here.

Traffic‘s “No Time to Live” is almost unrecognizable, and the arrangement actually has more of a Tumbleweed Connection– era Elton John vibe. LaVette shows that the Animals‘ “Don’t Let Me Be Misunderstood” has sonic similarities to “I Heard it Through the Grapevine.” Didn’t see that one coming.

Led Zeppelin‘s “All My Love” is shorn of its synthesizer elements, and is delivered as a piano-based number that draws the blues back to the song’s surface. Subtle Stax-style guitar and organ adorn the simple arrangement.

George Harrison‘s majestic “Isn’t it a Pity” was already fraught with emotion, and the slowed-down delivery here puts the focus on the lyrics. The song could have been even more effective if the arrangement had burst forth toward the end, but that’s a quibble.

LaVette initially removes the signature instrumental licks from Pink Floyd‘s “Wish You Were Here” and again concentrates on the vocal. As the song unfolds, a beautiful string section and piano echo the lick, but they do so in a subtle fashion.

Slide guitar helps refashion Ringo Starr‘s “It Don’t Come Easy” into a dusty-road country blues. The transformation is so radical that first-time listeners might not even initially catch that it’s a cover.

Paul McCartney‘s “Maybe I’m Amazed” gets the torch-song treatment, and for once LaVette’s delivery isn’t radically removed from the original, though it is slowed down. A gentle horn section adorns the album’s cover of the Rolling Stones‘ “Salt of the Earth.”

Pizzicato strings and what can only be described as LaVettes’ open relationship with the lyrics make her interpretation of the Moody Blues‘ “Nights in White Satin” an unusual experience. The band takes the song at nearly half-tempo.

Things get funked up for LaVette’s cover of Derek & the Dominos‘ “Why Does Love Got to Be So Bad,” and just in time — things had been getting subdued those last few tracks. The original’s Clapton-Allman guitar interplay is replaced with a chunky horn section. Hearing LaVette sing this song makes one wonder why Aretha never tackled it.

Acoustic guitar handles the melody that Elton John originally played on “Don’t Let the Sun Go Down on Me.” Again LaVette sets the pace to “glacial.” The song all but begs for the arrangement to swell as it unfolds, but LaVette keeps tight rein on the band. Things never do build much beyond the basic arrangement. So while LaVette sings beautifully, this one could have gone places.

The album closes with a live track: LaVette’s performance of the Who‘s “Love Reign O’er Me” from the Kennedy Center Honors. Here she’s at the top of her game. The arrangement is original and faithful at the same time. The dynamics that are slightly lacking from Interpretations’ studio tracks are in full flower here. The musical motifs of the song are well explored in different ways than the original, and LaVette’s voice soars atop the ebb and flow of the instrumentation. It’s a fitting and effective way to close this album.