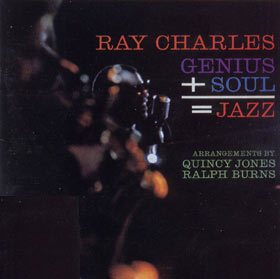 Musical dilettantes sometimes dabble in a wide variety of forms for all the wrong reasons. Sometimes they do it simply because they can: maybe their status or financial wherewithal means they can try on different styles of music like a pair of pants, and then they can toss them aside when it’s no longer trendy of headline-grabbing to do so.

Other artists travel across a wide array of styles because they possess a true understanding and feel for the music. Ray Charles fell into the latter camp. His career was filled with highlights in all sorts of genres. While soul/R&B was his primary métier, his efforts in other forms were always genuine excursions into the music. Few artists have ever been able to cross over like Charles did. From his groundbreaking 1962 record Modern Sounds in Country and Western to his mainstream pop efforts, Ray Charles always brought an authenticity and a genuine appreciation of the music to bear on his releases.

By the time of 1961’s Geniuis + Soul = Jazz, Ray was at the top of his game. His command of the industry was such that he could do whatever he wanted. So it was that he assembled the Count Basie Orchestra (without billing them as such) and recorded ten sides with them. The resulting album is a landmark. With Ray out front on expressive, gurgling Hammond organ, the band charges through highly-charged big band arrangements. Lining up a mix of originals and well-chosen covers (by the likes of George and Ira Gershwin and others), Charles breathed new life into a form that was nearing the end of its commercial heyday.

Beautifully recorded and full of all the drama and exuberance one expects of the best big-band music, Genius + Soul = Jazz represents one of many high water marks in Ray Charles’ long career. But proving the timelessness of the form, Ray returned to the genre nearly a decade later for a follow-up album called My Kind of Jazz. Again featuring arrangement by Quincy Jones (the earlier album was arranged by Jones and Ralph Burns) it traded in the same styles and served up more delicious instrumentals. Together, the two albums are a seamless, fulfilling listen.

In 2010 Concord Music paired those two albums on a disc. But they’re merely half of what the label has dubbed Genius + Soul = Jazz (2CD Expanded Edition). Along with the twenty sides contained on those records, the new set adds two more thematically-linked albums to fill a second disc. Jazz Number II (also known as My Kind of Jazz Part 2) was released in 1973. It found Charles branching out a bit into South American-influenced jazz (aka tropicalia/exotica, but without the blips and bleeps and stereo gimmickry of someone like Martin Denny or Esquivel). Featuring arrangements from a number of heavy hitters including Alf Clausen (later to find additional fame as the musical director for The Simpsons TV show), Jazz Number II was another fine addition to Ray’s recorded legacy.

Charles returned to the form yet again for 1975’s My Kind of Jazz Part III. Again working with Clausen and other arrangers, the timeless (or out-of-time, depending on one’s viewpoint) album charted. On these later albums, Charles’ specific contribution sometimes is a bit harder to pin down: his piano (and occasional organ) isn’t always as out-front in the mix/arrangement as on the earlier discs, but the style and delivery of the tracks is very much of a piece with the 1961, 1970 and 1972 albums. (That said, his Wurlitzer electric piano solo is a highlight of “I’m Gonna Go Fishin'”.) Making sure to give value for money — as if thirty-six Ray Charles jazz sides weren’t enough — the Concord 2CD set includes a bonus track, a rendition of the classic “Misty” originally included on trombonist Steve Turre‘s 1999 In the Spur of the Moment LP. The track features Ray Charles near the end of his recording career, but still in full command of his playing abilities, and confident enough to relish in his role as (prominent) sideman.