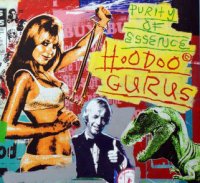 If you’re a fan of the Hoodoo Gurus‘ best work, you tend to expect a fairly high standard in terms of quality songwriting, arrangement and that elusive takes-your-breath-away factor. And that’s because on albums dating back to the Australian group’s 1984 debut (Stoneage Romeos) (and yes, the parentheses are part of the title), they delivered those qualities in a major way.

Straddling that line between in-your-face rock and impossibly catchy, tuneful pop, the Hoodoo Gurus — led by songwriter, guitarist and vocalist Dave Faulkner — turned out instant classics like “I Want You Back” and “My Girl” on that first disc. While the eventual demise of the Big Time label rendered many of that era’s best albums difficult to find (think of Max Eider‘s The Best Kisser in the World, for example), the Hoodoo Gurus album was quickly picked up by the majors and re-released with a different cover art.

And so began their successful run. Darlings of the college rock radio circuit of the 80s, the Hoodoo Gurus turned out an impressive string of albums, all of which enjoyed some measure of stateside success. Their aesthetic was an amalgam of trash-pop culture influences welded to a beefy rock hybrid. Straightforwardly rocking enough to catch the ear of mainstream rock fans weaned on Tom Petty, yet edgy enough to appeal to fans of the Replacements, the Hoodoo Gurus released seven albums of their pop-garage kitchen sink rock in the 1983-1995 period.

After that, the release schedule slowed down. The group officially disbanded in 1998 but returned in the 21st century with 2004’s Mach Schau, a record named after the cat-call hurled at the Beatles during their Hamburg tenure (literally “make show,” it means, essentially, “work harder to amuse us!”)

With 2010 the Hoodoo Gurus present Purity of Essence, another aptly-named set. Right out of the gate — as they’re wont to do — the band blasts into an anthemic tune. “Crackin’ Up” (not the 50s nugget) contains faint echoes of “Out that Door” from 1987’s Blow Your Cool.

“A Few Home Truths” opens with a slashing, martial guitar attack evocative of the Clash‘s “London Calling” but the song trades in far more melodic territory. Straightforward but heartfelt harmonies brighten the chorus. A dynamic arrangement makes the track even more memorable.

Even when the Hoodoo Gurus head into ballad territory, they do so in a rocking fashion. “Are You Sleeping” is a prime example of this. A drum pattern heavy on the toms and nearly bereft of cymbals gives the track a headed-for-something tension that sustains the song. The band’s trademark chiming guitars shimmer, and the solo has that recorded-in-a-gymnasium feel that helped add drama to early hits like “I Want You Back.” The musical denouement never cones, but it’s a lovely tune nonetheless.

“Burnt Orange” introduces a left-field element to the mix: horns. Sounding like a cross between amped-up Gurus and, well, early Oingo Boingo, the song is still pretty much a standard garage rocker (and I mean that in a good way). It’s easy to imagine the horn chart figure played on a Vox Continental, but that’s not the approach the band employs here. Played at a breakneck pace, “Burnt Orange” ultimately sounds more like Stink-era Replacments. Well…with horns.

The three-chord garage aesthetic is evident on “I Hope You’re Happy,” but the shouted chorus vocals make the track, well, happier, and remind this listener a bit of Katrina and the Waves, specifically their hit “Walking on Sunshine.” A call-and-response lead guitar and organ interplay adds to the festivities, and again the arrangement — something given obvious care throughout the album — makes the already-good song more than it would otherwise be. The exuberant track quotes “Can I Get a Witness” near its end.

What would the blues sound like delivered by an Australian powerpop/garage band? “Ashamed of Me” answers that question. Persistent down-stroke guitar chording adds a Clashy element, but the bluesy solo keeps the song true to its roots.

“What’s In it for Me?” quotes the woo-woo of the Rolling Stones‘ “Sympathy for the Devil,” but the swaggering tune rocks and steamrolls to a beat more closely related to the Stones’ more hard-charging material. Here they sound a tiny bit like the Georgia Satellites crossed with the Chesterfield Kings. Like many of the cuts on Purity of Essence, this one would be a radio hit in a just universe. “Over Nothing” slows things down, and shows that despite his no-b.s. rock chops, Faulkner has a pretty impressive vocal range. Here he heads for the bottom end of his range, turning in a gravelly, emotive performance. Heavily reverbed guitar lines are tastefully worked into the song. And the group’s use of keyboards is — as almost always — judiciously and effectively employed.

“You’ve Got Another Thing Coming” is — thankfully — not a cover of the Judas Priest hit. Instead it’s a riff-based rocker that wouldn’t have been out of place on Mars Needs Guitars. Deceptively straightforward, the song in fact has lots of chords.

“Only in America” kicks off with a melody that (perhaps unknowingly) serves up a rock-oriented rethinking of Santana’s Moonflower cover of the Zombies‘ “She’s Not There.” But then the full song kicks in, and sounds more like Another Grey Area-era Graham Parker with backing vocals by Difford and Tilbrook. Of course that’s not what we have here, but the feel remains. By the song’s end, listeners may well be thinking of the Music Explosion‘s “Little Bit o’ Soul” as well. Rarely has a song felt like so many other tunes without actually sounding like any of them. It’s still very good, though.

No Hoodoo Gurus album would be complete without a country-influenced tune, and “Somebody Take Me Home” does not disappoint. Here Faulkner and company sound a bit like Lynyrd Skynyrd at their peak, complete with the right-on-the-edge-of-hackneyed lyrical approach so necessary to that genre. Overdubbed lead guitars serve up that necessary triple-threat.

“Let Me In” chugs along with a minimum of chords (mostly just two of ’em, actually), preferring to make its point though sheer force. The Ramones proved what could be done with few chords, and the Hoodoo Gurus provide even more evidence that less can indeed be more.

The band serves up some subtlety on “Evening Shade.” Here Faulkner almost sounds like some other singer. An appealing, hypnotically-repeating guitar figure is the basis for the song. Faulkner’s weary tone provides just the right mood for the song’s lyrics. Vaguely jazzy lead chording comes as a bit of surprise, but it’s well-incorporated into the song.

Heavily Leslie’d guitar figures prominently on “Why So Sad?” The heavier vibe is effective, but perhaps a notch less so than the approach used on the other tracks on Purity of Essence. At times, “Why So Sad?” sounds like an early 70s arena rocker, and while that’s a new direction for these Aussies to explore, it doesn’t fit them especially well. The song improves toward its end as it bursts into reckless-abandon overdrive.

The Stooges recorded songs called “1969” and “1970,” but the Hoodoo Gurus’ harmony-laden anthem “1968” sounds more like “You Really Got Me”-era Kinks. This one would likely be quite effective onstage. Lyrics like “rock and roll planet goin’ ape” may remind listeners of the goofy and fun-loving lyrics of early Hoodoo Gurus numbers like “”Dig it Up” and “Like Wow, Wipeout.”

“The Stars Look Down” closes the disc. Here Faulkner takes a troubadour approach. With a windy desert plain feel, the slow-tempo lyric-centric number heads for Neil Young territory: you’ll expect a certain kind of solo, and you’ll get it.

The band self-produced the album with help from Charles Fisher (he produced two earlier Gurus albums as well) and got the estimable Ed Stasium to mix the tracks for maximum punch. Faulkner played some solo dates at March 2010 SXSW. Purity of Essence will be out May 11, 2010. Find it. Buy it. Enjoy it.