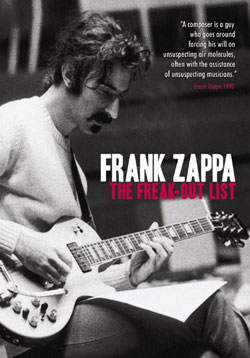 Great artists are always more than the sum of their influences. But understanding the amalgam of influences that inform the sensibility of an artist can be a useful window into a fuller appreciation of that artist. On the 1966 debut LP Freak Out by the Mothers (of Invention), Frank Zappa listed 179 names in the gatefold. Those names gave listeners (well, readers) an idea of where they might look for clues as to the development of Zappa’s particular and peculiar world view.

The new DVD The Freak Out List surveys that list, and breaks it into several categories. Making use of informed critics, analysts, historians and musicians, The Freak Out List argues in favor of Zappa’s abiding appreciating for a wide variety of forms. Boundary-pushing classical works of Stravinsky, Holst and of course Edgard Varèse had an obvious influence on Zappa’s work. The Freak Out List does an admirable job of connecting the dots between the work of those artists and Zappa’s synthesis of their ideas into something new and different. Making ample use of sound clips and genuinely useful commentary, the film explores the sonic clues and connections in Zappa’s own work.

For a project not sanctioned by the Zappa Family Trust (a notoriously iron-fisted outfit helmed by Zappa’s widow Gail), The Freak Out List provides ample clips of Zappa’s work. Without those, the film would be a failed example of telling vs. showing. As it is, The Freak Out List is wholly successful.

Veterans of Zappa’s bands (most notably including Don Preston, Ian Underwood and George Duke) don’t always agree with the musicological conclusions arrived at by the attendant scholars, and the producers of The Freak Out List bravely include a wide array of viewpoints, leaving it up to the viewer to decide. Likely Zappa himself would have given grudging approval to many of the conclusions reached in the film.

The Freak Out List gives equal weight to Zappa’s interest in jazz, doo-wop and other forms, and employs its example-commentary-example formula throughout, making a strong case as it argues for a greater appreciation of this complex and oft-misunderstood artist.

The only area that The Freak Out List perhaps fails to explore in suitable depth is Zappa’s predilection toward the shocking, prurient and scatological. While much is made of FZ’s love of humor, no serious attempt is made to divine the roots of Zappa’s thinking that led to such immortal (or immoral) numbers as “Catholic Girls,” “The Illinois Enema Bandit” or “Keep it Greasy.” To be fair, that side of Zappa’s oeuvre developed in the 1970s, and if artists like Swamp Dogg (to name one) were an influence on Zappa, he didn’t name-check them on the liners of Freak Out.

Typical of MVD Visual releases, the packaging is spare, the DVD navigation basic, and the bonus materials scant. Basically, you get what’s advertised, and little more. But for anyone interested in a better understanding of the influences that helped create one of the most important artists of the 20th century, the pop-scholarly approach of The Freak Out List is essential viewing.