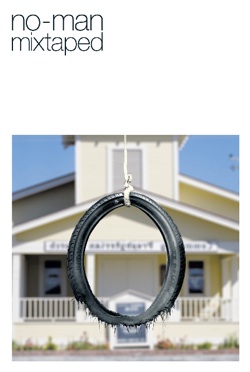 Steven Wilson is one busy dude. In addition to fronting Porcupine Tree (for whom he writes virtually all of the music and lyrics), he’s also involved in a number of other high-profile projects. His collaboration with Aviv Geffen (Blackfield) has resulted in a couple of albums and a live set. He’s at the center of the current 40th anniversary reissue project of King Crimson albums, acting as producer. And yet all that is seemingly not enough. For years now Wilson has been half of a duo called No-man. With vocalist Tim Bowness, No-man is a tricky proposition to describe. Incorporating elements of 80s acts like Talk Talk and Icehouse, No-man is built around the icy, detached-yet-emotional vocal stylings of Bowness. Wilson plays guitar; his well-known facility for crafting hook-laden melodies is dialed way back here. The moody pieces rely on texture and Bowness’ vocals for their effect.

On Mixtaped, the latest DVD document of a 2008 No-man concert, the duo are joined by several other players, most notably a pair of violinists. While it’s clear that this lineup bears the capacity to rock — witness the feedback-drenched guitar on “Time Travel in Texas” — for the most part they keep any ambitions in that direction firmly in check. In fact, with the exception of that track and “Things Change” — the second and second-to-last numbers of the concert, respectively — the mood is somber and restrained.

Bowness doesn’t aid in expanding No-man’s sonic palette. His voice, while evocative of a particular mood, seems incapable (or at least unwilling) of moving beyond a singular approach. In the end, his breathy, angst-filled delivery is monochromatic. What is effective on a couple numbers wears out its welcome over the course of an hour and a half.

The playing is ace, precise and pretty. But it’s also largely forgettable. “All Sweet Things” sounds like Pink Floyd circa The Wall, with a less histrionic Midge Ure on vocals. (If that doesn’t sound all that appealing to you, well, then there you go.) The musical texture is all well and good, but listeners seeking hooks or memorable melody lines are advised to look toward Wilson’s other work, wherein they’ll find it in great supply.

A bonus disc features a documentary on the band that covers their entire history. Cynics might well ask if such a band deserves such in-depth treatment. The docu is well-done, and as with all Wilson-involved projects, the whole package is expertly and lovingly put together.

Verdict: interesting and certainly worth a look for Wilson fans, it’s not up to the high quality standard of his solo work, Blackfield or Porcupine Tree.