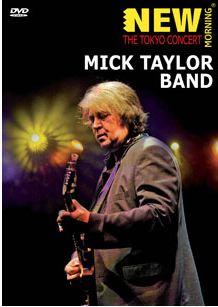 The people who’ve left the Rolling Stones add up to an amazing amount of talent. The late and lamented Brian Jones may well have had a lot more to give musically, had he not met his untimely swimming-pool demise in 1969. (The circumstances of said death remain murky at best.)

Mick Taylor was at the center of much of the Stones’ best work, but since leaving that group he has kept (by design or misfortune) a relatively low profile. But with the 21st century has come renewed activity by a number of sixties stalwarts (I’m thinking here of Peter Green), and so we have a new concert video from Mick Taylor.

While Taylor never had the setbacks with which Green had to contend, his time out of the limelight hasn’t dimmed his abilities. He’s not the most expressive or memorable vocalist, but his voice serves him well enough on the seven tracks on New Morning: The Tokyo Concert, a document of a 2009 supper-club gig.

The primary focus of the songs is Taylor’s playing ,and he serves it up in spades. Aided and abetted by longtime associate Max Middleton (Jeff Beck Group) on keyboards, Taylor leads the group through a set mixed between originals and well-chosen covers.

A track called “Twisted Sister” has nothing to do with the 80s glam act; instead it’s a medium-tempo number featuring tasty slide work from Taylor. Vocally the guitarist stretches toward a hoary Mark Knopfler style.

“Losing My Faith” is built around a gospel chord progression. Again, Taylor’s fills and solo are the song’s high point, his vocals its weakness.

A cover of Led Zeppelin‘s “You Shook Me” (that attribution’s my little joke, folks) is up next. Taylor’s rendition is competent but not life-changing. Middleton’s choice of keyboard sound is perplexing; rather than go for a straight organ sound, he selects a more modern faux-organ patch that seems ill-suited to the classic vibe of the song. His piano fills more than redeem things, though. Taylor’s tasty licks abound.

Bob Dylan‘s “Blind Willie McTell” — cowritten by Taylor and originally recorded for (but not included on) Dylan’s 1983 Infidels — is both the highlight and Achilles’ heel of the set. The choice of the song is inspired, as it points out Taylor’s contributions beyond his guitar playing. The song’s structure is something of a departure from the other songs on New Morning. But tragically, Taylor’s guitar is out of tune. No kidding. It’s not so terribly noticeable when he plays single-note solo runs, but when he hits chords — ouch. If the listener can get beyond this — some will be able to, some won’t be able to manage it — the performance is otherwise peerless. A brief interpolation of Dylan’s “All Along the Watchtower” is — or was, before I told you about it — a mid-song surprise.

Taylor wraps up the relatively brief set with a Rolling Stones cover. But it’s not one from the Taylor-era Stones. Instead it’s the Beggars Banquet track “No Expectations” from 1968, an intriguing choice. The track fits Taylor’s style well, and he brings the blues feeling of the song to the fore.

The show is shot on videotape and is of exceptional visual quality. The well-behaved supper club crowd behaves in that stereotypical way (Cheap Trick At Budokan being a notable exception to the rule), remaining silent during the songs, clapping appreciatively at each tune’s conclusion.

Though billed as bonus material, in fact the mini-documentary On the Road With Mick Taylor is the real highlight of the disc. Despite dodgy sound on some of the “field recordings” (actually, Taylor playing acoustic in his living room) the documentary is reasonably intimate and revealing. It also shows Taylor to be candid, engaging, and musically versatile: he’s a quite good pianist. What’s more, the live 1995 concert footage in the documentary shows Taylor and band in a more lively, looser mood. Those numbers — not full songs as shown in the film — are in many cases superior to the Tokyo set. In fact, Taylor’s voice is in better form, and his guitar’s in tune.

It’s certainly good to see and hear that Taylor’s still at it. For fans of Taylor’s solo work and/or Rolling Stones completists, New Morning: The Tokyo Concert is a worthwhile purchase. Honestly, others may lack sufficient interest to warrant the (admittedly minor) investment to view the concert. But the bonus documentary is well worth seeing for anyone interested in Taylor, the Rolling Stones, John Mayall, or Bob Dylan (Taylor’s involvement with each is addressed in the film).