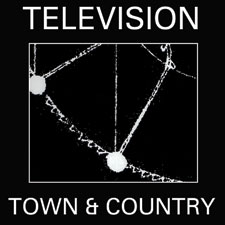 Few expected it when in 1991, one of rock’s most legendary and influential bands suddenly (and briefly) reappeared on the scene. Television had released two landmark albums in the 1970s, both revolutionary in bridging the chasm between 70s guitar-god rock and the minimalist aesthetic of punk/new wave. With a style best described as the audio equivalent of film noir, Television stood rock convention on its head, melding an angular, bracing method that appealed to the hipsters, while forging a twin-guitar attack that warmed the hearts of fist-pumping rockers everywhere.

It’s a familiar story: Television’s influence far outstripped the group’s commercial impact. Like so many other groups of that era (New York Dolls, Rocket From the Tombs) their genius was recognized — and even then only belatedly — primarily by the cognoscenti.

So it was a surprise when the classic lineup quartet (ace guitarists Tom Verlaine and Richard Lloyd plus Fred Smith and Billy Ficca) reformed. Their eponymous 1992 release picked right up where Adventure had left off some fourteen years earlier. Yet Television sounds today even less dated than the earlier efforts.

The reformed group played dates in the USA and England; several shows were captured by audience tapers. A two-disc recording from the Town & Country Club in London finds Television doing precisely what one might expect. Never ones to look backward, they played the new songs while expanding arrangements in a considered, logical way without ever descending into noodlesome jamwankery.

This set presents most of the ’92 album, but the group inexplicably passed over one of the most accessible tracks, “Shane, She Wrote This.” The sole nod to the past is the encore, “Little Johnny Jewel.” This set is a must for aficionados of ’77 punk and, for that matter, damn near everything that came in its wake.