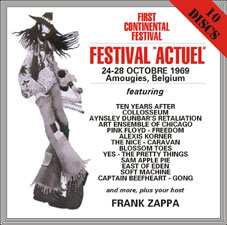 In October 1969 — two and a half months after Woodstock — the rock festival was at its peak. Eclectic festivals were the norm. So it was then that the French indie/jazz music mag Actuel planned to sponsor a five-day show in Paris. Oddly, they chose Frank Zappa to serve as emcee. Speaking no French, Zappa chose to communicate through music, and jammed onstage with a few of the groups. Last-minute permit difficulties forced the relocation of the festival to Mont de l’Enclus in Amougies Belgium. A film was made of concert highlights, but owing to performance-rights issues, the film, Music Power, was never released.

So ended the story…almost. In 2005 a figure known only as “JJB” released his audience tapes of the show to interested parties at no charge. While the tapes are not release quality — distortion and tape speed problems are evident, and the taper simply switched off his recorder mid-song if he didn’t care for an act — the music serves as an important historical document.

The tapes include complete sets by several major acts. Ten Years After built upon their newfound fame. The original Yes lineup played a rousing set of mostly covers. The Nice (featuring Keith Emerson) did a set, one of their last before folding. Canterbury favorites Caravan played a full set, as did Captain Beefheart. Pink Floyd jammed with Zappa, as did overlooked psychedelic group Blossom Toes. (Happy 64th birthday today to Blossom Toes’ Jim Cregan.) In most cases, Zappa would just surprise the musicians mid-set and walk on. Interviewed in March 2006, Blossom Toes guitarist Brian Godding told me, “Frank [came] on, tuned up and [tried] to teach us one of his tunes…in front of the crowd!”

Ten discs in all, the Festival Actuel set provides a time-capsule alternative to Woodstock. Highly recommended to anyone interested in the progressive end of late 60s rock.

Difficulty to Locate: 9 out of 10
General Listenability: 7 out of 10